“He that sees another in error, and endeavors not to correct it, testifies himself to be in error.” 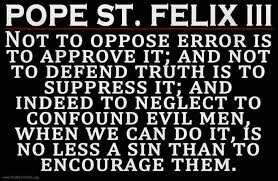 “Not to oppose error, is to approve it, and not to defend truth is to suppress it, and indeed to neglect to confound evil men, when we can do it, is no less a sin than to encourage them.”

“We declare that if ever it should appear that any bishop, even one acting as an Archbishop, Patriarch, or Primate, or a Cardinal of the Roman Church, or a legate, or even the Roman Pontiff, whether prior to his promotion to Cardinal, or prior to his election as Roman Pontiff, has beforehand deviated from the Catholic Faith or fallen into any heresy, we enact, we decree, we determine, we define: Such promotion or election in and of itself, even with the agreement and unanimous consent of all the Cardinals, shall be null, legally invalid, and void. It shall not be possible for such a promotion or election to be deemed valid or to be valid, neither through reception of office, consecration, subsequent administration, or possession, not even through the putative enthronement of a Roman Pontiff himself, together with the veneration and obedience accorded him by all. Such promotion or election shall not through any lapse of time in the foregoing situation be considered even partially legitimate in any way. Each and all of the words, as acts, laws, appointments of those so promoted or elected — and indeed, whatsoever flows there from — shall be lacking in force, and shall grant no stability and legal power to anyone whatsoever. Those so promoted or elected, by that very fact and without the need to make any further declaration, shall be deprived of any dignity, position, honor, title, authority, office, and power. Therefore, it is permitted to no one to impair this page of Our approval, renewal, sanction, statute, wills of repeal, of decrees, or to go contrary to it by a rash daring deed. If anyone, moreover, will have presumed to attempt this, he will incur the wrath of Almighty God and of the blessed Apostles Peter and Paul.” -Pope Paul IV (1555-1559), Bull “Cum ex Apostolatus Officio,” February 16, 1559, sec. 9

“All the evils of the world are due to lukewarm Catholics.”

“There will come a great prodigy, which will fill the world with awe. But this prodigy will be preceded by the triumph of a revolution during which the Church will go through ordeals that are beyond description.”
“Liberal Catholics are the worst enemies of the Church.”

“Who can fail to see that society is at the present time, more than in any past age, suffering from a terrible and deep-rooted malady which, developing every day and eating into its inmost being, is dragging it to destruction? You understand, Venerable Brethren, what this disease is—apostasy from God… When all this is considered there is good reason to fear lest this great perversity may be as it were a foretaste, and perhaps the beginning of those evils which are reserved for the last days; and that there may be already in the world the ‘Son of Perdition’ [Antichrist] of whom the Apostle speaks.”

“The Church has no right whatsoever to touch the institution and form of the Sacraments.” 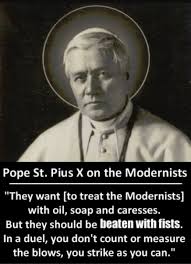 hey want them [the Modernists] to be treated with oil, soap, and caresses. But they should be beaten with fists. In a duel, you don’t count or measure the blows, you strike as you can. War is not made with charity: it is a struggle, a duel. If Our Lord were not terrible, He would not have given an example in this too. See how he treated the Philistines, the sowers of error, the wolves in sheep’s clothing, the traders: He scourged them with whips!”

“The true friends of the people are neither the revolutionaries nor the innovators. They are the traditionalists.” Letter on the Sillon, August 25, 1910

“Let us not set foot in the opposing camp, because we would thus be giving the enemy a proof of our weakness, which the enemy would try to interpret as a sign of weakness and complicity.” (ecumenism? Abu Dhabi? China?)

“The greatest obstacle in the apostolate of the Church is the timidity, or rather the cowardice, of the faithful.”

“Attempting to reconcile our Faith with the modern mentality leads not only to weakening of that Faith, but to its total destruction.”

“In our time more than ever before, the greatest asset of the liars is the cowardice and weakness of good men, and all the vigor of Satan’s reign is due to the easy-going weakness of Catholics.... And this reproach can be leveled at the weak and timid Catholics of all countries.” Beatification of Joan of Arc, December 13, 1898

“Henceforth the enemy of the Church is no longer outside the Church; he is now within.“ Encyclical Esupremi apostolatus, October 4, 1903

“One of the primary obligations assigned by Christ to the office committed to Us of feeding the Lord’s flock is that of guarding with the greatest vigilance the Deposit of Faith delivered to the Saints, rejecting the profane novelties of words, and the gainsaying of knowledge falsely so-called…. We may no longer keep silent [against the Modernists], lest we should seem to fail in our essential duty.” Encyclical Letter Pascendi Dominici Gregis, September 8, 1907, Sec. 1

“The partisans of errors are to be sought not only among the Church’s open enemies; but, what is to be most dreaded and deplored, in her very bosom, and are the more mischievous the less they keep in the open. We allude, Venerable Brethren, to many who belong to the Catholic laity, and what is much more sad, to the ranks of the priesthood itself, thoroughly imbued with the poisonous doctrines taught by the enemies of the Church.” Encyclical Letter Pascendi Dominici Gregis, September 8, 1907

“Modernists vent all their bitterness and hatred on Catholics who zealously fight the battles of the church. There is no species of insult which they do not heap upon them, but their usual course is to charge them with ignorance or obstinacy. When an adversary rises up against them with an erudition and force that renders them redoubtable, they seek to make a conspiracy of silence around him to nullify the effects of his attack.” Encyclical Letter Pascendi Dominici Gregis, September 8, 1907 (seems to me the man sitting on Chair of peter is very good at this)

“For Catholics, nothing will remove the authority of the Second Council of Nicaea, where it condemns those who dare, after the impious fashion of heretics to deride ecclesiastical traditions, to invent novelties of some kind or to endeavor by malice or craft to overthrow any one of the legitimate traditions of the Catholic Church.” Encyclical Letter Pascendi Dominici Gregis, September 8, 1907


“They lay the ax not to the branches and shoots, but to the very root, that is, to the faith and its deepest fibers. And once having struck at this root of immortality, they proceed to diffuse poison through the whole tree so that there is no part of the Catholic truth which they leave untouched, none that they do not strive to corrupt. Further, none is more skillful, none more astute than they, in the employment of a thousand noxious devices, for they play the double part of rationalist and Catholic, and this so craftily that they easily lead the unwary into error; and as audacity is their chief characteristic, there is no conclusion of any kind from which they shrink or which they do not thrust forward with pertinacity and assurance.” Encyclical Letter Pascendi Dominici Gregis, September 8, 1907

Certain Errors of the Orientals, Denzinger # 2147a.[From the letter, “Ex quo,” to the Archbishops Apostolic Delegates in Byzantium, in Greece, in Egypt, in Mesopotamia, in Persia, in Syria, and in the Oriental Indies, December 26, 1910]

“It is well known that to the Church there belongs no right whatsoever to innovate anything touching on the substance of the sacrament.”

“The present wickedness of the world is only the beginning of the sorrows which must take place before the end of the world.”

Pope St. Pius X said: “All the strength of Satan’s reign is due to the easygoing weakness of Catholics.”

“We believe that the present hour is a dread phase of the events foretold by Christ. It seems that darkness is about to fall on the world. Humanity is in the grip of a supreme crisis.”

Eugene Cardinal Pacelli (the future Pope Pius XII) in 1931:
“I am worried by the Blessed Virgin’s messages to Lucy of Fatima. This persistence of Mary about the dangers which menace the Church is a Divine warning against the suicide of altering the Faith, in Her liturgy, Her theology and Her soul…I hear all around me innovators who wish to dismantle the Sacred Chapel, destroy the universal flame of the true Faith of the Church, reject Her ornaments and make Her feel remorse for Her historical past.”

“A day will come when the civilized world will deny its God, when the Church will doubt as Peter doubted. She will be tempted to believe that man has become God. In our churches, Christians will search in vain for the red lamp where God awaits them. Like Mary Magdalene, weeping before the empty tomb, they will ask, ‘Where have they taken Him?”

Next post: Some not-well known prophecies from Saints about these times.