Comment: The prayer theme is chosen chronologically, but ( not surprising to us) the readings we choose (randomly), after a prayer to the Holy Spirit, usually fit the theme.Today both readings – the Bible and the Book of Truth – were about Salvation of souls. We read in Isaiah about the Suffering Servant – Jesus, who died to save us.

Jesus, on the Cross, gave his Mother to us – we are her children. The Reading from the Book of Truth is about Mary’s role in the salvation of souls. As displayed at Cana, Jesus does what His Mother asks of Him. She intercedes for her children. She too, wants all her children to know her Son and be saved. God has given her special Graces and Power over the evil one. He fears her. Exorcist priests reveal this fear of her – the demons will not even say her name. 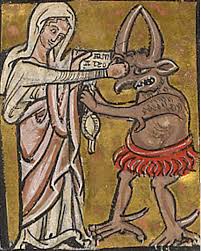 This role as Co-Redemptrix, Mediatrix and Advocate has long been recognized by the Catholic Church. To begin with,  her “fiat” to the angel Gabriel, enabled our Saviour to be born. In the Book of Truth, she is called the “Mother of Salvation”

As is to be expected, the man who sits on the chair of Peter (the False Prophet of the Book of Revelation) denies the role of Mary. In fact, he has downplayed Mary’s role, blasphemed, and insulted the Mother of God many times. This particular title – he has repeatedly spoken out against quite a few times. It seems he, too, fears Mary and her power.

The reading, which we opened in the Book of Truth comes from our Mother of Salvation. In it she explains her role in the battle for souls and in destroying the evil serpent. She explains the new era of peace – foretold at Fatima, which will follow.

Who would believe what we have heard?To whom has the arm of the LORD been revealed?2 He grew up like a sapling before him, like a shoot from the parched earth;
He had no majestic bearing to catch our eye,
no beauty to draw us to him.
3He was spurned and avoided by men,a man of suffering, knowing pain,
Like one from whom you turn your face,spurned, and we held him in no esteem.
4 Yet it was our pain that he bore,our sufferings he endured.
We thought of him as stricken,struck down by God and afflicted,
5But he was pierced for our sins,crushed for our iniquity.
He bore the punishment that makes us whole,by his wounds we were healed.
6 We had all gone astray like sheep,all following our own way;
But the LORD laid upon him the guilt of us all.
7 Though harshly treated, he submitted and did not open his mouth;
Like a lamb led to slaughter or a sheep silent before shearers,
he did not open his mouth.
8 Seized and condemned, he was taken away. Who would have thought any more of his destiny?

For he was cut off from the land of the living, struck for the sins of his people.

9 He was given a grave among the wicked, a burial place with evildoers,
Though he had done no wrong,nor was deceit found in his mouth.

10 But it was the LORD’s will to crush him with pain.By making his life as a reparation offering,he shall see his offspring, shall lengthen his days,
and the LORD’s will shall be accomplished through him.

My child, the world is about to undergo the final changes, as the battle for souls intensifies.

Satan will hurt the Catholic Church and I, the Mother of God, will be implicated in the division of the Church.

My role as Co-Redemptrix, Mediatrix, Advocate is not being accepted by divisions in the Catholic Church.

I am not accepted in many quarters as to the role I must play in the salvation of souls. My poor Son is so hurt by the way in which I, the Mother of God, have been dismissed. My role, as the destroyer of the serpent, is not understood.

I have been blessed with the Graces, and the power, to defeat and destroy the evil one. He, the evil one, has many followers from inside the Catholic Church who want to oppose the power I have been given by God the Most High.

The Era of Peace, I spoke about in Fatima, has been forgotten.

This Era of Peace will take place after the Second Coming of My Son and will last 1,000 years.

This will come about when Heaven and Earth will merge as one Glorious New Paradise. Because of the faith of my children and their devotion to me, their beloved Mother, many souls will enter the New Paradise.

Satan is now working hard to persuade members of the Catholic Church that this is not to be.

My role as the Mother of Salvation and Co-Redemptrix, working alongside my beloved Son to herald the Second Coming, is being denied.

Children, pray that those souls, victims of the deceiver within the Catholic Church, do not drive my children away from their moment of salvation.

Pray that Pope Benedict can stop this evil from permeating throughout the Catholic Church.

Never give up children in your fight to stand up for the Truth.

My Son’s promise to return to bring humanity to Eternal Life in Paradise is about to be fulfilled. But, He will be opposed every step of the way by those souls who have allowed the deceit of the evil one to turn their heads.

Loyalty, within the Church, towards my Son will weaken.

My role as Co-Redemptrix, Mediatrix, Advocate, will not be accepted.

Pray that my Son’s priests will stay strong and that they will defend the Truth.

Thank you Jesus for being present with us at our prayer Group, and in guiding us. You always connect all the dots for us. Amen!