The Medal of Salvation (from the Book of Truth)

2. My Medal of Salvation will 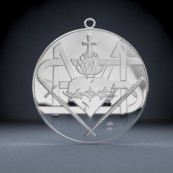 convert those who wear it and they will be

shown Mercy by my Son. I now request you, child, to have the Medal of Salvation produced now and a Scapular of the Seal of the Living God made. – August 23rd, 2013

3. These Medals will convert all souls who are open to the Mercy of my Son, Jesus Christ. This will then result in the salvation of millions. – September 14th, 2013

4. My dear child, God wants to save every single person, of every single faith, as well as those who deny the Existence of Him and His Son, Jesus Christ. This is why people of every age, every culture and every denomination, must receive a Medal of Salvation. – January 20th, 2014

5. Do not reject the Gift of the Medal of Salvation, because this final Medal, brought to you by me, through the Mercy of God, will draw billions of souls towards Eternal Life. – January 20th, 2014

6. The Medal of Salvation, when carried upon your person, will, along with the other Graces it promises, safeguard you against the power of the antichrist. – February 7th, 2014

7. Know now, that Gifts given to the world by My Mother, over the centuries, must be used to protect yourselves. Know also, that the Medal of Salvation – more powerful than any other – will be your defense against the lure of the antichrist. Every attempt will be made to stop the Medal of Salvation, but nothing will stop the Powers associated with this Gift. – February 20th, 2014

8. The Seal of the Living God will protect you against the mark of the beast and the Medal of Salvation against the heresy, which will tumble out of the mouths of My enemies, who will seize My Church on Earth. – May 5th, 2014