God has warned us in His Holy Scriptures:

“And he opened his mouth unto blasphemies against God” (Apoc 13:6)…

“For fools speak folly, and their minds plot iniquity: to practice ungodliness,
to utter error concerning the Lord, to leave the craving of the hungry unsatisfied, and to deprive the thirsty of drink.7 The villainies of villains are evil; they devise wicked devices to ruin the poor with lying words, even when the plea of the needy is right”.( Isaiah 32:6-7)

“Beware of false prophets, who come to you in the clothing of sheep, but inwardly they are ravening wolves.”  (Matthew 7:15)

What is a false prophet?

A false prophet speaks true words of God at times, but when it suits him, he speaks words that are not from God, but implies, or says that they are. He is two-faced. He says what people want to hear. He is a “Janus” or Janus-faced.

Jesus described false prophets as “wolves in sheep’s clothing”. Revelation describes the false prophet as having 2 horns like a lamb. (See Rev. 13:11 above) The Mitre the pope wears can signify the “2 horns”.

Jesus tells us we will know them by their fruits. Some of them are listed below:

The words of the False Prophet belie his true identity: 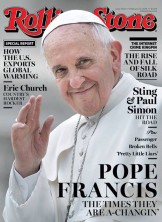 “Bergoglio earlier this week  (April 2016) delivered a sermon at Casa Santa Marta in which he called Judas Iscariot a poor, repentant man, victimized and driven to suicide by unmerciful lovers of the law”. The writer comments: “This stunning attempt to rehabilitate Judas Iscariot, the greatest, most wicked traitor in history and despairing self-murderer, is beyond unprecedented.  It reeks of supernatural evil.” See: (http://www.barnhardt.biz/2016/04/16/gloves-off-paragraph-303-god-wills-mortal-sin-and-bergoglios-sinister-affinity-for-judas-iscariot/  )

In an interview published in the La Stampa on December 31, 2013, he said: “Never fear the final judgment, because Christ will always be at our side.”

Likewise, in Amoris Laetitia (297), Pope Francis wrote: “No one can be condemned forever, because that is not the logic of the Gospel!” See: https://veritas-vincit-international.org/2017/02/11/pope-francis-everyone-goes-to-heaven/

In referring to religious orders, he said that he worries because  “The Spirit does not follow the logic of human success.” He denounced them as “Pelagians,” who want a return to asceticism and penance, “soldiers who seem ready to do anything for the defense of faith and morality, and then some scandal emerges involving the founder [male or female].”

A true Pope would commend to us Jesus’ words:  “Go into the whole world and proclaim the gospel to every creature” (Mark 16:15). Pope Paul VI affirmed in his letter On Evangelization in the Modern World: “We wish to confirm once more that the task of evangelizing all people constitutes the essential mission of the Church” (14). Evangelization is at the very heart of what it means to be followers of the Lord.

See Part 2 tomorrow: some clues on how to discern false prophets.