Prayers are Groups A & E: (See https://remnantdisciples.wordpress.com/crusade-prayer-group-format/ for details).

He, the antichrist, will speak many languages, but not one word of Latin will come from his lips

My dearly beloved daughter, My Time is close. The closer the Great Day draws, the more signs will be witnessed in the world.

The man they will reveal to the world as the ‘man of peace’ is preparing to imitate Me in every conceivable way. He knows the Holy Scriptures inside out and, because of his parentage, will utter the Words back to front, so that their meaning is inverted. Out of his mouth will pour the blasphemies, the heresies, the lies and the desecration of My Word. He will impress everyone with his knowledge of all things Sacred. He will recite extracts from My Teachings, which he will passionately proclaim from every secular stage in the world, until people sit up and take notice of him.

Many will say: “Who is this man who speaks with such wisdom? Who is he who calls out to the world with love in his heart for the masses? Is he the Lord God, Jesus Christ?” they will ask, when many miracles will be attributed to him. And when he walks upon the altars with My other enemies, who will be dressed as holy servants of God, he will be fully accepted by both divisions in the world – the true believers and the heathen.

He, the antichrist, will twist the Truth and declare the lie that he is Me and that he comes to bring you salvation. The lie will be declared that he comes in the flesh. He will never allude to Jesus Christ – Who came in the flesh – by His death on the Cross, for this is impossible. No, he will declare the fact in reverse. He will say that he has come, finally, at this time, in the flesh. Many will believe him to be the Christ. He, the antichrist, will speak many languages, but not one word of Latin will come from his lips.

The beast will be idolized, while I, the True Saviour of the world, will be forgotten and My Word trampled upon. You must never believe the lies, which will be uttered by the beast, when he sits proudly in the temple set up to honour him.

Note: When this last reading was opened,  we were amazed  because one of us had just read an article by a priest and his opinion about  why the devil hates Latin. (Ecclesiastical Latin has always only been used to worship God – it is a “sacred” language – reserved for God alone.) 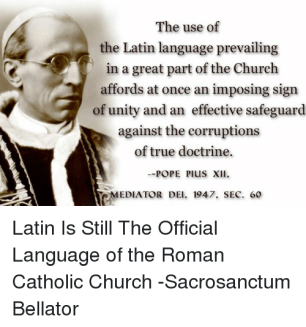