Prophecy from the Book of Truth

“…They must retain the Holy Missals, the vestments, the Holy Bible and the Holy Crosses. These will all  be replaced.  …”

…To those Christians who believe that this abomination will only be seen in the Catholic Church, then know that it will affect all Christian churches, until they banish all mentions of, or signs of, Me. In time, you will be severely punished for mentioning My Name…. (Saturday, August 17th, 2013 @ 11:50)

We have seen many prophecies from the Book of Truth fulfilled. (see our home page – menu – prophecies fulfilled).

Of course, we should not be surprised – but we always are. We are angry, saddened, and react in any way we can – in blogs, petitions, and financial help to those who try to alert us to events and dangers.

The latest, is of course, the vestments to be worn at the closing Mass of the World Meeting of Families in Dublin. 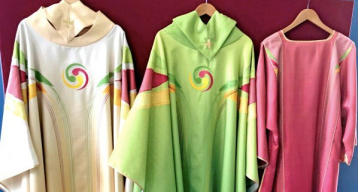 “… the spiral symbol in the middle is apparently a pre-Christian Celtic symbol found on Neolithic monuments across the island.” In other words, a pagan symbol.

Fr. Damian McNeice, master of ceremonies for the event, said of the symbols, “It’s the whole notion of the journey into the ‘divine’, and almost like eternal life too.”

“These vestments for the World Meeting of Families,” Catholic author Leila Marie Lawler wrote ” …The lack of holy beauty says it all. These are not Catholic robes.”

The pastel colours are very unmanly/effeminate.

I think it was deliberate (colours and imagery) but I didn’t know if I was just interpreting it in light of the latest sexual homo-abuse allegations.

The fact that no Christian symbol is on the vestments definitely is deliberate. There are rules in creating vestments and I don’t believe anyone accidentally forgot about Christ And the Eucharist when designing them.   No: they denied Him deliberately.

Of course, this wasn’t the first time. 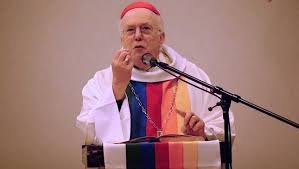 Cardinal Godfried Danneels, the emeritus archbishop of Brussels, was a personal appointment by Pope Francis to the Synods of Bishops on the family.

“…the prophecies foretold through this prophet unfold now…

… Pray now, My children, that you, My army, increase in numbers and unite as one to fight the spiritual battle that lies ahead. …”

For comment on other part of this prophecy for- Holy Missals, the Bible and Holy Crosses see our next post: Is this also Fulfilling Prophecy? Part 2. This will be posted  tomorrow.

One thought on “New vestments at WMF in Dublin – the beginning of another prophecy fulfilled.”