Prayers are Groups A & D: (See https://remnantdisciplesjtm.com/crusade-prayer-group-format/ for details). 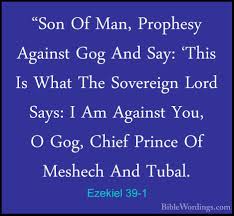 Third Prophecy Against Gog. You, son of man, prophesy against Gog, saying: Thus says the Lord GOD: Here I am, Gog, coming at you, chief princeof Meshech and Tubal. 2 I will turn you around, even though I urged you on and brought you up from the recesses of Zaphon and let you attack the mountains of Israel. 3 Then I will strike the bow from your left hand and make the arrows drop from your right. 4 Upon the mountains of Israel you shall fall, you and all your troops and the peoples with you. I will give you as food to birds of prey of every kind and to wild beasts to be eaten. 5 In the open field you shall fall, for I have spoken—oracle of the Lord GOD.

6 I will send fire against Magog and against those who live securely on the seacoast, and they will know that I am the LORD. 7 I will reveal my holy name among my people Israel, and I will never again allow my holy name to be defiled. Then the nations shall know that I am the LORD, the Holy One of Israel. 8 Yes, it is coming! It shall happen—oracle of the Lord GOD. This is the day I decreed.

Once paganism grips My Church, this will mark the final chapter

My dearly beloved daughter, the main reason so many people today, and especially the young, do not want to know Me is because of their unmitigated self-interest. Self-obsession, and a desire to please only one’s self and desires, has meant that real love for one another is missing and there is little charity present in such souls. When they separate themselves from others, in pursuit of self-fulfillment, they cannot love their neighbor. When they do not love their neighbor, they cannot love Me.

Separation from God has never been so widespread. With little love in their hearts, evil finds a welcome environment in which to take root. Once evil is planted, in the souls who become easy prey, it will grow and spread quickly. The further it spreads, the less love will there be in the soul and a hatred for others will be instilled within it. Soon, hatred, jealousy, envy, avarice and greed will become the common traits, which unite modern society, until eventually, it will become synthesized until souls will feel nothing. Emptiness of spirit leads to great danger, for the evil one is intelligent and he will use souls at that stage to wage war against the Presence of God in the world. When the world becomes self-obsessed and demands every kind of right, which it deems to be more important than giving generously of one-self – then nothing good can come of this.

When Lucifer disobeyed My Father, it was pride, which led to his downfall. Pride and a love of self, where all else comes second, will lead to the final downfall of the human race. Disobedience to God is rampant at this time. So little regard for His Commandments can be seen and this has meant that man will disobey every single one of the Ten Commandments. When the First Commandment is broken by My Church on Earth – the final bastion of My Father over His children – the world will witness the worst chastisement since the flood.

Once paganism grips My Church, this will mark the final chapter.

When God’s children love themselves and preen before Him, He weeps bitter Tears. But, when He is replaced in the hearts of all by paganism and a false god, His Wrath will be unprecedented.

He will, by the power of the occult, perform what will be seen to be cures for people who are terminally ill

My dearly beloved daughter, I wish to tell you that the changes, which will prepare the world for My Second Coming, are about to be seen by the whole world.

The wars in the Middle East will accelerate and be widespread. They will involve the West as well as the East. The turmoil will be halted by the man of peace, the beast, the antichrist.Many will, in time, believe that he is God, the Messiah; so much power will he seem to possess. His powers have been accorded to him by the father of evil, Satan.

He will, by the power of the occult, perform what will be seen to be cures for people who are terminally ill. They will be cured of their illnesses temporarily and people will believe that his powers will have come from Heaven. That he is I, Jesus Christ.They will believe that he comes to prepare the world for the New Era and that the Second Coming is taking place before them.

He will perform other miracles, but they will simply be an illusion. Some sacred servants of Mine will drop before him and adore him. Political leaders will publicly applaud him. He will be seen as the good and humble messiah and he will emulate all My traits. Sadly he will deceive many.

I beg you, My disciples, to warn people that I, Jesus Christ, will not come in the flesh.This cannot be. I have already come to earth in the flesh and this cannot happen a second time. When I come again it will be through the way in which I leftand then the wicked will be banished and My New Paradise will replace the earth.

Do not be deceived. Be alert. I will continue to warn you about the antichrist and the lies he will present to the world. In this way, you can help Me save those poor souls who will follow him slavishly into the pits of hell.

Comment: We were surprised at the Bible Reading about Gog and Magog. These two are also mentioned in the Book of Truth. They are the false Prophet and the Antichrist. This ties up with the two readings from the Book of Truth we opened up on today. The first reading mentioned “When the First Commandment is broken by My Church on Earth – the final bastion of My Father over His children…” Many commandments have already been broken by the Church as have many Sacraments (eg.Marriage, Penance, Holy Orders), but the first commandment is adoring false gods.

The false Prophet (the man sitting on the chair of Peter) has already enabled the aforementioned things. And there is a new Mass in the pipeline.   I worry about the “New Evangelisation” encyclical to be released at the end of June, especially when Evangelisation will take precedence over Doctrine*.  Are these the things which will lead up to the breaking of the first Commandment – the New One World Church? The pope’s very first popevideo years ago was already promoting this concept.  These things will be enabled by him (the False Prophet) –Gog and the Antichrist – Magog. It was shocking to think of priests and servants of God falling before the AC and adoring him!

*See our posts last month on the New Evangelisation – Parts 1 to 4 posted on 1st, 2nd 3rd and 4th May, respectively

Well, Lord. You warned us and have reminded us – to watch out and be on the lookout, so that we are not caught unawares, and so that we can warn others.

Thank you Lord for the readings today.