Francis uses various tactics to get people thinking differently. He has already achieved quite a lot since the beginning of his papacy.

“The False Prophet will have a religion without a cross. A religion without a world to come. A religion to destroy religions. There will be a counterfeit church. Christ’s Church [the Catholic Church] will be one. And the False Prophet will create the other. The false church will be worldly, ecumenical, and global. It will be a loose federation of churches. And religions forming some type of global association. A world parliament of churches. It will be emptied of all divine content and will be the mystical body of the Antichrist.”

“She (Our Lady) announces the “dispersion of the pastors” (bishops) by the Church itself, real pastors who will be replaced by others formed by hell, initiated in all vices, all iniquities, perfidious, who will cover souls with filth…. (“The Breton Stigmatist”, p 40.

The Catholic Church will make a number of alarming statements, as to why it has to change and amend every part of its structure. …

All these changes will come about quickly, in the future, and the spread of these things will astonish many. Amidst it all, there will be confusion, fear, sadness and great distress.

Some of the tactics he has used to attack the governing structure and doctrine in order to create this false church include:

Francis said that “[t]he pluralism and the diversity of religions” is “willed by God in His wisdom.” Pope Francis and Sheik Ahmad el-Tayeb signed a document on “human fraternity” on Feb. 4, 2019 Abu Dhabi. ( https://www.catholicnews.com/services/englishnews/2019/does-god-want-religious-diversity-abu-dhabi-text-raises-questions.cfm ) This is a lie. In fact, Jesus said “Go and baptize all nations”. PF is setting the scene for the new one-world religion which is to come.

“ December 4, 2017 (Rorate Caeli) — This week, the Vatican’s organ for promulgating the Official Acts of the Apostolic See, Acta Apostolicae Sedis (AAS), has published its October 2016 issue, containing Pope Francis’ infamous Letter to the Buenos Aires Bishops. AAS not only published this letter, declaring that there are “no other interpretations” (“No hay otras interpretaciones”) of Amoris Laetitia other than those of the Buenos Aires bishops, but it also published the full Buenos Aires guidelines themselves, which permit Holy Communion in some cases for couples in a state of permanent and public adultery who are not committed to living in complete continence.

Most significantly, AAS upgrades Pope Francis’ private letter to the Buenos Aires bishops to the official magisterial status of an “Apostolic L 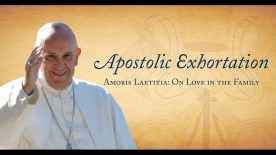 etter” (“Epistola Apostolica”) – AND it includes a special rescript as an addendum by Cardinal Pietro Parolin, Secretary of State. This rescript declares that Pope Francis expressly intends that BOTH documents – the pope’s letter and the Buenos Aires guidelines themselves- bear the character of his “authentic Magisterium”, and that the pope personally ordered their publication in AAS and on the Vatican website….”

See the excerpted portion of the AAS in its original published form at: https://www.lifesitenews.com/opinion/declaring-communion-guidelines-for-adulterers-to-be-magisterium-cannot-be-s

“…Many of My sacred servants will not be immediately aware of what is happening. It will only be when they read letters, given to them from those in high places, that they will find difficulty.

Those who uphold My Holy Word, given to man through the Gift of the Holy Bible, will be challenged and urged to accept amendments. These amendments will be given to them and they will be expected to swallow them, and accept them as The Truth. They amount to one thing….

They will urge those holy sacred servants of Mine, to accept tolerance of sin. …”

One thought on “PF/FP – Destructuring the Structure – Part 2”