The comments of eminent bishops regarding  the ‘Instrumentum Laboris’ of the upcoming Amazonian synod has drawn many comments and warnings from them. They organized a 40 day Crusade of prayer and fasting for the synod. This prayer request contained references to a pdf document which detailed some of the errors, all of which are related to “Humanism”.

Card Burke and Bp. Schneider wrote  in detail about the errors of the Synod; Archbishop Vigano (see below) links it to the infiltration of freemasonry into the Church; Cardinal Mueller comments; and Mother Miriam speaks from the heart- clearly stating the errors being proposed in the synod and replying with the relevant Truths of the Catholic Faith.

“There has been a campaign to “infiltrate” t

he Church “that goes back centuries,” Archbishop Carlo Maria Viganò said in a new interview with Dr. Robert Moynihan of Inside the Vatican.

This campaign can be traced “in particular, to the creation in the middle of the 1700s of freemasonry,” said Viganò. …

…In a previous interview with Moynihan, Viganò said the “figure of Christ is absent”(*) from the working document of the Amazon Synod…”

* (This is typical of humanism- Christ is replaced)

“Among the principal errors, we especially note the following;

For example ( from Card. Burke and Bp. Schneider’s Pdf document)

“Mother Earth”; … live “in communion with nature as a whole”;

…“harmony of relationships” between “the whole cosmos – nature, men, the supreme being” and the “various spiritual forces” (n°12 &

The Magisterium of the Church rejects such an implicit pantheism as incompatible with the Catholic Faith: “The warmth of Mother Earth, whose divinity pervades the whole of creation, is held to bridge the gap between creation and the transcendent Father-God of Judaism and Christianity, and removes the prospect of being judged by such a Being. In such a vision of a closed universe that contains ‘God’ and other spiritual beings along with ourselves, we recognize here an implicit pantheism” (Pontifical Council for Culture & Pontifical Council for Interreligious Dialogue, “Jesus Christ. The Bearer of the Water of Life: A Christian Reflection on the ‘New Age’”, 2.3.1).

and  download the pdf by clicking on “  eight-page declaration  “

“…What he believes the Instrumentum laboris is missing, however, is “a clear witness to the self-communication of God in the

verbum incarnatum, to the sacramentality of the Church, to the Sacraments as objective means of Grace instead of mere self-referential symbols…”

That “the integrity of man does not only consist of the unity with a bio-nature, but in the Divine Sonship and in the grace-filled communion with the Holy Trinity,” he explained, “not only with the environment and our shared world.”

… “But the contemplation of the cosmos is only the occasion for the glorification of God and His wonderful work in nature and history. The cosmos, however, is not to be adored like God, but only the Creator Himself.”

“Instead of presenting an ambiguous approach with a vague religiosity and the futile attempt to turn Christianity into a science of salvation by sacralizing the cosmos and the biodiverse nature and ecology, it is about looking to the center and origin of our Faith,” he said, the Incarnation.

“…The goal of the “Global Pact on Education” is to hand “on to younger generations a united and fraternal common home.” Mother told listeners this is the “common home of the devil. There is no common home we have but Heaven and Christianity on Earth this side of Heaven. We have no common home other than that.”

…. “This [the Global Education Pact],” the pope said, “will result in men and women who are open, responsible, prepared to listen, dialogue and reflect with others, and capable of weaving relationships with families, between generations, and with civil society, and thus to create a new humanism.” Mother called the pope’s initiative to globalize education “demonic.”    …

Pope Francis stated that to reach his proposed objectives, everyone needs to “have the courage to place the human person at the center” and to “train individuals who are ready to offer themselves in service of the community.”  To this Mother responded, “Isn’t that what is wrong with our world today, beloved? Instead of placing Christ at the center, we place man at the center?”

The article Mother went through outlined the pope’s objectives, including to “heal the fracture between man and the Absolute.”Mother noted that “the Absolute” is an ambiguous phrase and could refer to Buddha, the Muslim god, or any god. “What happened to God? The Absolute is not one of God’s names.” …

Prophecies from the Book of Truth : 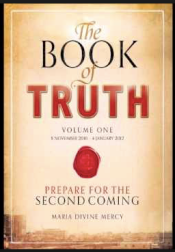 These prophecies, have been telling us since March 2013 (when this man was elected as pope), that Pope Francis would introduce a “new humanism”.

It is the exact phrase used by Pope Francis “new humanism”. In these prophecies, Jesus, God the Father and Our Lady warn us of what is to come, so that we are ready and not deceived.

The prophecies about the “New Evangelisation” include:

“…With so much confusion in the world and amongst My Church on earth, the challenge for humanity is to be able to differentiate between right and wrong in the Eyes of God. But, for many Christians, they will be drawn away from Me by a new global form of evangelisation, which will focus exclusively on politic...” (Book of Truth – 1 Jan. 2015 )

“In the name of social justice and social compassion, the false prophet will set out, what the world will believe to be, to evangelise and create a modern church. This church will be seen to reach out to all sinners and to embrace those sinners whose sins are not acceptable by Me”.(Book of Truth – August 10th, 2013 )

Read the words in the prophecies below that describe what “humanism” is and what it is not, and the direct effects it will have on us.

Some of the prophecies warning us about “Humanism” include:

“Humanism is an affront to God because it focuses on man’s needs and not the need to repent of sin before the Creator of all that is. If you ignore the mortal sins, clearly defined in the Laws laid down by God, which lead to eternal damnation, then no amount of compassion for the civil rights of the human race will atone for those sins.” – December 25th, 2014 @ 15:10

“They will use the message of humanism, love of one another, in terms of your ability to look after the poor, uneducated and needy, as a substitute for the Truth you were given in the Gospels.” – November 9th, 2013 @ 11:48

“The True Church will become a Remnant… Not only will they not serve Him, their duty will be to serve the needs of humanism, which will, at its very core, deny the Existence of the Supernatural State of God and all that He stands for.” – June 28th, 2014 @ 15:03

“Most importantly, it will be presented as being harmless fun for those who dabble in new age practices and as being an important part of personal development – a form of humanism and love of self.” – June 3rd, 2013 @ 21:50

“You will betray Me; deny Me and embrace My enemies, for you will be so caught up in the new religion – the secular humanism, which will come as a wolf dressed in sheep’s clothing to devour you – that I will be forgotten.” – June 30th, 2014 @ 23:50

“As and from this year, My Crosses will begin to disappear and while My Churches, and those who say they serve Me, talk about the importance of humanism, you will not hear talk of the importance of surrendering to Me, Jesus Christ, your Saviour.” – April 18th, 2014 @ 23:24

“Humanism will become the substitute for Christianity where no mention of God will be uttered” – August 8th, 2014 @ 21:15

*“My dear child, the world will soon be presented, by the enemies of my Son, with a wicked book, which will have the number one embedded within its cover in red and black with the head of a goat hidden within its design. …. It will be a book, which sets out to evangelise the world into believing in the importance of humanism.” – June 6th, 2014 @ 23:15

All messages from the Book of Truth can be accessed from: https://missionofsalvation.com/ 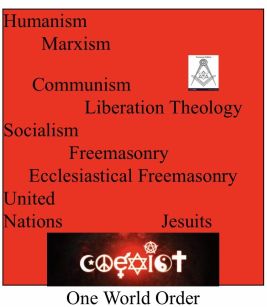 When you connect the dots – you see the connections between Humanism, Marxism, Communism, Liberation Theology, Freemasonry, Ecclesiastical Freemasonry, the United Nations, the Jesuits and Pope Francis.We were warned!

No doubt this will go hand in hand with the “New Humanism”, which the pope has clearly called for here:

We have had plenty of notice. All the signs are there, but sadly, still many (most) people will be deceived and gleefully go to their doom. We have to fight – to spread the Truth and to pray, pray, pray. Souls are at stake. 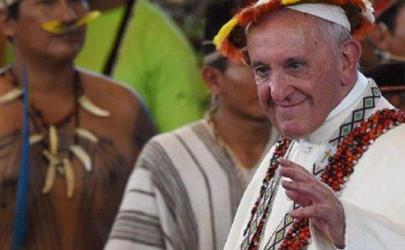 3 thoughts on “Connecting the dots … Part 4: The New Humanism, Errors and Prophecy”