Three out of four will deny Me

My daughter, the time when all public acknowledgement as to Who I Am, will become but just a faint flicker in the wick of a candle, which has burned right down to the end, is almost upon you.

Those who say they are of Me will speak little of Me. Those who are loyal to Me will be shock 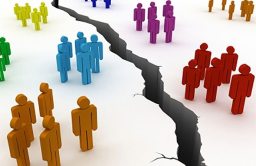 ed when they see so many who will deny Me. The time when the faithful will be separated from those who will be led into grave error is almost upon you. In those days ahead, the blind, the deaf and those who will have failed to remain alert to the True Word of God, will gather in their billions and accept a false doctrine – not of Me.

When you hear speak of the new renewal of the faith pledge, which will be a form of the Sacrament of Confirmation, know then that this will be manmade. It will be meaningless in My Eyes. It will be presented by the false prophet as part of his global plan to unite all religions in the world. My Divinity will be brushed to one side. My Word forgotten and buried, while My Teachings will be twisted, in order to coerce the faithful into accepting a new form of so-called evangelism.

My Word, however, will remain alive, because those who will remain in My Church, as it was set up from the beginning, will not deny Me. Three out of four will deny Me. Only My Remnant will cling to Me and keep My Word and many of them will be bewildered. Those poor souls, who will remain in My Church when it has been seized by the new doctrine, will not know where to turn. To them I say this. Be strong. Be firm. Do not deny Me. Pray for My Guidance and continue to serve Me, as you have always done. When you are asked to deny Me, by those who claim to be acting for the good of all – all religions – turn your back, for you will be asked to embrace paganism, which will be disguised as Christianity.

As these imposters, enemies of God, invade My Church, within its hierarchy, My Father will send down a terrible Chastisement. He will tilt the world and not one man, woman or child will be able to ignore these upheavals. When My enemies attack My Mystical Body, they will cause much damage, much confusion and lead many away from the Truth. But they will never destroy My Church, because My Remnant Army will never let go of the Truth or be forced to swear allegiance to Satan or his agents.

Many wars will now escalate and storms and earthquakes will mount, until the Roar of My Father’s Wrath is felt everywhere.

To those enemies of Mine, who walk amongst you and who mislead My Church, know this. I will never allow you to win over those souls for whom I gave up My Life. Your arrogance will be short-lived, your wicked acts stopped and your attempts to hurt the souls you have earmarked brought to an abrupt end. You will never rise up against the Word of God, without Divine Intervention brought down upon you. Your allegiance to the evil one will end in disaster for you and everyone you manage to deceive. When you try to advance towards the gates of Heaven to boast of your allegiance to Satan, you will be cut down, chained and cast into the abyss, without any Mercy shown to you.

Go now, all those of you who witness these things which are to come, and remain alert at all times. You must continue to serve Me, for there can only be one Master.