A History of Scandal! What else could you expect?

A friend, whom I often quote on this site, sent me an article about an Argentinian bishop, who made an observational comment about Bergoglio, based on personal experience, from when they were both bishops in Argentina.

They were both auxiliary Bishops in Buenos Aires between 1992 and 1998.

We were told by our conservative Catholic hosts that their perception was that Archbishop Aguer had always been the orthodox/traditional one..…. and that Bergoglio was perceived to be the radical liberal.

Aguer is generally considered a representative of the conservative sector of the Argentine Church. In homilies and episcopal documents, he has harshly criticized the proposed legalization of abortion in Argentina, some government-sponsored sex education plans and contraception campaigns, the secularisation of culture, the idea of abolishing the requirement of clerical celibacy, the persecution of and discrimination against Christians, consumerism, “rock culture”, etc.

Now the point is that Archbishop Aguer was the Archbishop that these orthodox/true Catholics from the Buenos Aires area trusted and believed was upholding the authentic Catholic faith…….definitely not Bergoglio… he was a renowned ‘lefty’.

Interesting that in our Church today that the Traditional (orthodox) priests and bishops seem to be assigned the lesser parishes and dioceses.

In this case, the radical lefty gets the bigger diocese and finishes up on the Chair of Peter.

And it is also very interesting to have Archbishop Aguer now emerge and point out that Bergoglio is considered a ‘moral relativist’.

The politicians who are about to introduce abortion in Argentina, are “morally relativists,” and they must think “that Pope Francis is one too,” former La Plata Archbishop Hector Aguer wrote on InfoCatolica.com (February 1).

Arguer observed that Fernández and his second concubine received Communion from Argentinean-born Archbishop Sánchez Sorondo during a Eucharist in the Vatican,

“This is incredible, but between fellow countrymen of the same rank everything is finally possible. One more scandal, among many others…”

What this confirms (important for all those who are still doubters) – is that Bergoglio has not changed.

I will add here an article written by a Buenos Aires journalist  about Bergoglio, on the day he was elected. At the time, it seemed rather extreme to many people, (except for those who read the Book of Truth) .

” We have many friends around the world, including in the dear Argentine Republic. And we asked a cherished friend, Marcelo González, of Panorama Católico Internacional, who knows the Church of Argentina as well as the palm of his hand, to send us a report on the (then) new pope. Here it goes:

Of all the unthinkable candidates, Jorge Mario Bergoglio is perhaps the worst. Not because he openly professes doctrines against the faith and morals, but because, judging from his work as Archbishop of Buenos Aires, faith and morals seem to have been irrelevant to him!

A sworn enemy of the Traditional Mass, he has only allowed imitations of it in the hands of declared enemies of the ancient liturgy. He has persecuted every single priest who made an effort to wear a cassock, preach with firmness, or that was simply interested in Summorum Pontificum.

Famous for his inconsistency (at times, for the unintelligibility of his addresses and homilies), accustomed to the use of coarse, demagogical, and ambiguous expressions, it cannot be said that his magisterium is heterodox, but rather non-existent; for how confusing it is.

His entourage in the Buenos Aires Curia, with the exception of a few clerics, has not been characterized by the virtue of their actions. Several are under grave suspicion of moral misbehavior.

He has not missed any occasion for holding acts in which he lent his Cathedral to Protestants, Muslims, Jews, and even to partisan groups in the name of an impossible and unnecessary interreligious dialogue. He is famous for his meetings with Protestants in the Luna Park arena where, together with preacher of the Pontifical House, Raniero Cantalamessa,he was “blessed” by Protestant ministers, in a common act of worship in which he, in practice, accepted the validity of the “powers” of the TV-pastors.

This election is incomprehensible: he is not a polyglot, he has no Curial experience, he does not shine for his sanctity, he is loose in doctrine and liturgy, he has not fought against abortion and only very weakly against homosexual “marriage” [approved with practically no opposition from the episcopate], he has no manners to honor the Pontifical Throne. He has never fought for anything else than to remain in positions of power.

It really cannot be what Benedict wanted for the Church. And he does not seem to have any of the conditions required to continue his work.

May God help His Church. One can never dismiss, as humanly hard as it may seem, the possibility of a conversion… and, nonetheless, the future terrifies us.”

This was written 7 years ago and only speaks of his previous history!!!

How much more can we add today and how true to form  this picture is! How on earth, we may ask, could he slip through and even be considered a candidate for election with this history?  Don’t the bishops do their homework? Perhaps the good bishops were outnumbered – a distinct possibility.  But if they did know what to expect and they were outnumbered, why don’t they speak up now? Only a few speak out- very occasionally, I might add.

Why don’t they shout it from the rooftops? (as Bro. Alexis Bugnolo does in his posts.)

Jesus tells us what they should be doing in Matthew 10:

“Courage Under Persecution. 26  “Therefore do not be afraid of them. Nothing is concealed that will not be revealed, nor secret that will not be known.  27 What I say to you in the darkness, speak in the light; what you hear whispered, proclaim on the housetops. 28 And do not be afraid of those who kill the body but cannot kill the soul; rather, be afraid of the one who can destroy both soul and body in Gehenna .29 Are not two sparrows sold for a small coin? Yet not one of them falls to the ground without your Father’s knowledge. 30 Even all the hairs of your head are counted. 31 So do not be afraid; you are worth more than many sparrows. before my heavenly Father. 33 But whoever denies me before others, I will deny before my heavenly Father. 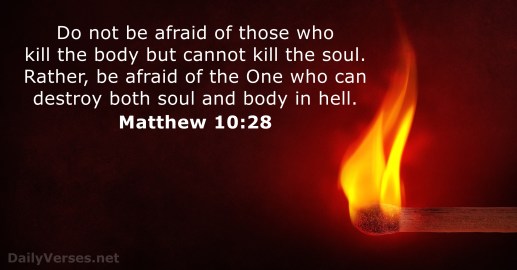 Previous to this advice, Jesus warned us of these times:

“Coming Persecutions. 16 “Behold, I am sending you like sheep in the midst of wolves; so be shrewd as serpents and simple as doves. 17 But beware of people, for they will hand you over to courts and scourge you in their synagogues,18 and you will be led before governors and kings for my sake as a witness before them and the pagans. 19 When they hand you over, do not worry about how you are to speak or what you are to say. You will be given at that moment what you are to say. 20 For it will not be you who speak but the Spirit of your Father speaking through you. 21 Brother will hand over brother to death, and the father his child; children will rise up against parents and have them put to death. 22 You will be hated by all because of my name, but whoever endures to the end will be saved. 23 When they persecute you in one town, flee to another.Amen, I say to you, you will not finish the towns of Israel before the Son of Man comes. 24 No disciple is above his teacher, no slave above his master. 25  It is enough for the disciple that he become like his teacher, for the slave that he become like his master. If they have called the master of the house Beelzebul,* how much more those of his household!”

We have to do our bit – shout it from the rooftops. Perhaps if there is a loud enough outcry, we may have some impact – at least to recognize who the true pope is! This is the first step. And God knows that Pope Benedict need our prayers and our whole-hearted support.