Prayer Theme: Protection During the Warning and from the Anti-christ

(N.B. The prayer theme is chronological, and all the readings are chosen by volunteers and the books opened randomly after a prayer by the whole prayer group to the Holy Spirit (i.e. Crusade Prayer 51)

II
4 For great is the LORD and highly to be praised,
to be feared above all gods.
5 For the gods of the nations are idols,
but the LORD made the heavens.
6 Splendor and power go before him;
power and grandeur are in his holy place.

III
7 Give to the LORD, you families of nations,
give to the LORD glory and might;
8 give to the LORD the glory due his name!
Bring gifts and enter his courts;
9 bow down to the LORD, splendid in holiness.
Tremble before him, all the earth;
10 declare among the nations: The LORD is king.
The world will surely stand fast, never to be shaken.
He rules the peoples with fairness.

IV
11 Let the heavens be glad and the earth rejoice;
let the sea and what fills it resound;
12 let the plains be joyful and all that is in them.
Then let all the trees of the forest rejoice
13 before the LORD who comes,
who comes to govern the earth,
To govern the world with justice
and the peoples with faithfulness.

My dearly beloved daughter, the pain of the prophets who came before you has never truly been known. But their load was heavy. Unlike visionaries, they worked alone and were denied any form of acceptance. 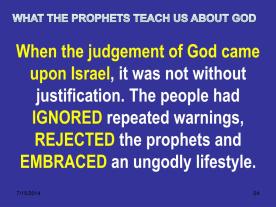 he prophets were hated because they prophesied in the Name of God and because they told of future tragedies, which were to befall humanity because of the stain of sin. They led lonely and frightening lives and fell down many times because of the difficulty of their Mission. They found it hard to understand the prophecies and many of them were ignorant of the meaning of the Words, which were dictated to them. Many were unsure whether they were, in fact, prophets at all, but by the fruits of their Mission, when they could see the spread of the Word of God and how quickly conversions were witnessed, they understood.

Most of God’s prophets were despised, mocked and considered to be heretics. Many were cast into the wilderness and tormented, all because they were messengers sent by God.

Prophets are sent into the world, only because of the Love of God, to prepare His children for events, which will have an impact on the salvation of their souls. Prophets have been given different Missions. In some cases, they were sent to warn humanity of the danger of disobeying the Father. Others were sent to warn of the consequences, which would befall man, were they to fall into grave sin. In other cases, it was to warn humanity of those who would cause them persecution and try to prevent the Word of God from nourishing His children. And then there was John the Baptist, sent to prepare God’s children for the coming of the Messiah, the only Son of God, sent to redeem them in the Eyes of God. But, they would not listen to him. The lowliest amongst the Jews did listen and accepted Me, Jesus Christ, the Son of man, but the holiest and most senior servants, within the church at that time, refused to accept the Truth.

And now you, My daughter, have been sent to prepare the way for My Second Coming so that I can bring salvation to the world and so that My New Paradise can be realized. This has been foretold, but will they listen? Sadly, no. They refuse to believe that My Father could possibly send into the world, in their time, His final prophet. By doing so, they are denying the Holy Gospel of God.  They believe that My Second Coming will not take place until far into the future. This error is not caused by their knowledge of Holy Scripture, but because of their flawed human reasoning, through which no part of My Promise to come again can be understood.

The Glorious Inheritance of your future, which awaits you, is yours. It is for every single one of you, no matter how blackened or pure your souls are, but you must prepare and be alert, for every demon from Hell roams the Earth at this time, and through others will try to stop you. Satan does not want My Father to bring His children home to their rightful Inheritance. He will spread lies, cause confusion, and distract you. His cunning and deceitful ways will be so subtle and he will work through other souls, who allow themselves to be open to such temptation. People will, therefore, not believe that God would ever send another prophet into the world in this way. It is unnecessary, they will say. They will be fooled into believing, instead, in the false prophets and as there are so many of them –wolves in sheep’s clothing – they will be drawn to those who will say all the things they want to hear.  Made up tales. Cleverly camouflaged in holy speak, which will hide terrible lies, which defile My Holy Word.

You, My daughter, will be the only one who will speak the True Word of God at this time, for all the world to hear. There are also other prophets of God, but their Missions are different. You will be asked to tell the Truth, but the Truth will shock, just as it will salvage souls.

Do those among you who proclaim to know Me not think that My Father would send a final prophet to prepare you, through the Power of the Holy Spirit, before My Second Coming? Don’t you know Him? Don’t you know how great His Love is? Do you not know the extent of His great Compassion? If you do, then you will listen to these Messages from Heaven. These Messages will be the last given to you before the Great Day when I come to Judge.

Those who will refuse My Hand of Mercy, who wander away from Me and who destroy their souls by honouring Satan and all his empty promises, instead of their God and Creator, will be denied Eternal Life, unless they beg for My Mercy.

There is time ahead to renew your lives. It is very simple. Come to Me and I will protect you.These prophecies relate to the future and they will be realized. Reject them as nonsense and you will rue the day you turned your back on the Truth promised to you as God’s cherished children.

Virgin Mary: The sin of indifference to my Son is rampant

(Received during a private apparition of the Blessed Mother, which lasted 30 minutes)

My child, there are so many souls destined for eternal exile, should they not turn back to my precious 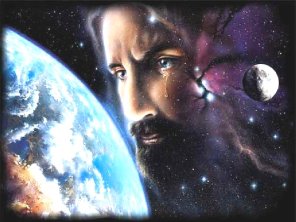 Son. My Son suffers greatly in anguish, as He watches these children lurch from one evil path to another.

The sin of indifference to my Son is rampant and so many, who know of His Existence, still choose, through their own free will, to disown Him.

Now is the time when they will understand what lies ahead of them if they do not repent during the Illumination of Conscience, which they will experience shortly.

For those of you who love my Son, take up His Cross and help Him to bring back those souls for whom He yearns to hold in His precious loving Arms.

So many of you, children, who do not really know my Son, must understand the gentle tenderness of His Heart. So much Love does He have for you all, that were you to see His suffering because of rejection, you would lie on the ground, cry and beg for the forgiveness of the sins of mankind.

Please, I urge you to pray hard for the conversion so desired by my Son during The Warning.

Your Blessed Mother
Queen of all Mankind