Destruction/desecration of the Church comes in 2 ways – attacking the Word of God, attacking the Faith and attacking the church buildings, statues, tabernacles and altars, even in movies etc. All of these are intertwined and are symptomatic of the hatred that Satan has for the Church.

“ The Church and her altars will be vandalized…”

“…Hatred comes from Satan and he spreads his venom amongst religious radicals, in order to vent his anger against God…. Wake up to the fact that Satan exists and that he is careful to hide this fact, so that he can fool souls into cursing God, the Creator of all that Is and ever will Be. Soon, all these atrocities will come to an end and all Glory will be Mine. It will not be long before Satan is destroyed and the human race will be able to see clearly Who I Am and the Glorious Life I will bring at My Second Coming. …” (29 June 2014 @ 8:20pm)  https://missionofsalvation.com/message-1161/

“Just as it will be in other Christian countries, your faith will be attacked, and every attempt will be made to wipe out all traces of Me, your Jesus. …The Christian faith will be banned, in time, along with other religions, which honour My Father. …I watch and protect you, as the time for the overturn of Christian Churches is close”.(23 Oct. 2012)

“The beast is planning the destruction of humanity in two ways, at this point in time. In the first instance, he is destroying life through abortion, murder and war. In the second instance, he is attacking My Church on Earth so that all churches, which honour Me, Jesus Christ and My beloved Father, are destroyed. In these ways he will steal souls and prevent them from following the Truth and from inheriting My Kingdom.” (6 June 2013)

Vandalism of churches (in the material sense) has been widespread for a while, but it has been missing from the mainstream media. We are all acquainted with how the Teachings of Christ and the Word of God, and the Sacraments are being desecrated, and our most cherished beliefs, but the recent attacks hit us with their evil intent and wanton destruction. The rage and hate is palpable.

ere were just under 1,000 recorded acts of defacement of Christian buildings and cemeteries in France in 2018.(https://fullfact.org/online/french-church-map/) 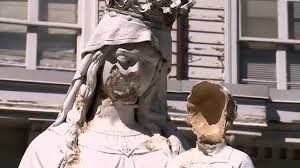 The article above questions why these attacks are not reported on mainstream media:

“Recent weeks have seen acts of vandalism and destruction at Catholic churches across the United States, including arsons, decapitations, and graffiti. In addition to the most recent attacks, in the last two weeks statues of Christ and the Virgin Mary have been attacked in Florida, Tennessee, New York, and Colorado. …  As secular media becomes more and more entrenched in reiterating narratives and packaging stories their readers will like and agree with politically, newspapers are increasingly no longer interested in performing the function of reporting the news….

The Fox coverage then quickly turned to the lack of mainstream news coverage on the issue:

“Churches are being burned to the ground. What?,” Mike Cernovich, a controversial right-leaning author, said in a video on Twitter. “Why is this not the biggest story of the day?”

Sean Feucht, a California worship leader and pastor, commenting on the incidents asked, “Where’s the outrage?”

I think the answer to the above questions is the same as to why most negative news about “Pope Francis” is also never reported on mainstream Media. There is no doubt that it is manipulated.  As a result, many Catholic faithful, and even priests, are not aware of the truth of what is happening in the Church.

From Book of Truth:

“…The Truth will never die. The Word of God, while desecrated, will never die. The Church can never die, though it may be flung into the wilderness. Even at its weakest hour, life will still remain, and no matter how much my Son’s Church is attacked, God will never permit it to be destroyed. …”  (Virgin Mary: 7 September 2014 @ 7:30pm