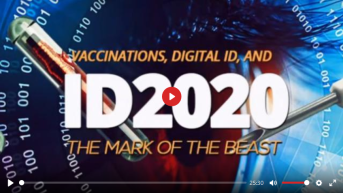 Sounds crazy! Right? If this person was a “religious fanatic” (as this volunteer  was probably labelled) – if  the volunteer knew about the ‘mark of the beast’ that is spoken about in the Book of  Revelation  – surely she would not have taken part in the trial?

Well, I hate to say it, but  that there are more prophecies (besides the Bible) that seem to validate this.

This volunteer was not the first person to suffer from severe neurological problems. “In this case, symptoms consistent with transverse myelitis, a rare inflammation of the spinal cord, said company spokesman Matthew Kent.” https://medicalxpress.com/news/2020-09-vaccine-trial-neurological-symptoms.html

Excerpts from the Book of Truth regarding vaccinations:

“My dear child, you must ask everyone to ask for God’s Mercy in all those matters, which involve the destruction of humanity. I refer to the wicked plans involving wars; plans to introduce a global vaccine – which you were warned about in the message of  26 November 2010  –  genocide and the murder of Christians, as well as other people of different religions, by the hands of evil men. …”

“Then there will be the introduction of a global vaccination, which will kill you, if you accept it.

This is a time when only prayer, and much of it, can soften the impact of this terrible wickedness, created by an elite group of people in power.

They are working in every part of your governments; and those who work, side by side with them every day, know what they are doing….”

“My dearly beloved daughter, the plans of the Masonic groups to take over the world currencies are getting close to completion. Their wicked plans also include a new global vaccination which will create disease all over the world to cause suffering on a scale never seen before. Avoid any such sudden global vaccination announced for it will kill you. Their evil schemes would shock all those innocent souls who have no idea how powerful they are. …”

These next two excerpts seem to pinpoint the situation:

“… Just as holy medals offer protection from Heaven with Power from God, the mark of the beast will bring with it death – death of the soul and death by a terrible disease. Those who refuse it will have to hide and prepare. I know this is frightening, but it is true. I will intervene with the help of your prayers to put an end to the persecution. …”

“…Rules, many of them, will mean that you will become prisoners. The key to your cell, which keeps you under their control, will be the Mark of the Beast. 666 will be embedded, its number hidden, into a chip which you will be forced to accept just as you would any vaccination.

Once embedded it will poison, not only your mind and soul, but your body. For it will cause a plague designed to wipe out much of the world’s population…”

Jesus refers to worldwide vaccination, and tells us that it will cause disease and suffering. He also refers to the mark of the beast in separate messages, and how this will kill us. The last message seems to combine these 2 aspects.

Is this why the person in the vaccine trial said what she did?

Could she feel the death of the soul?  Was the mark embedded in this vaccine, or will it be a different “vaccination”?

Is this what happened?

We still think the global vaccination and ‘mark of the beast’ are separate, although horrific, events. They will both involve injection it seems, and both will be compulsory

Firstly, “Mark of the Beast” is an actual payment system intended for use which will be in the  hand or forehead– hand seeming likely- but it will control the mind- (often represented by the forehead).

What is clear is that they could have inserted a microchip to experiment  with the Trial vaccination in some patients as an undisclosed and/or even unauthorised part of the already risky trial. The patients have already signed waivers to participate.

This is not to say that it WAS in the vaccination but that it might have entered the trial.

Also, one nannochip manufactured for use in humans was actually called Angel666, manufactured by the company ‘Digital Angel’. They could have experimented with it.

Another aspect to consider is that (I think) this vaccine by Astrozeneca was based on aborted baby cells and I think used some form of genetic insertion– a modification.

Does that not take away our God-given design? Made in his image? … then tampered with- at a basic genetic cell level… sounds diabolical to me.

So chip or no chip in the vaccine, this person may be feeling the moral effects of co-operating with evil designs.

Let us, none of us, experience the torture her mind and body now feels, of the loss of God. Let us not co-operate with evil at any time but be very prudent.

And remain alert to the mark (chip) as well as any sudden global vaccination initiative.

Article  by Remnant Disciple and Remnant child of Mary