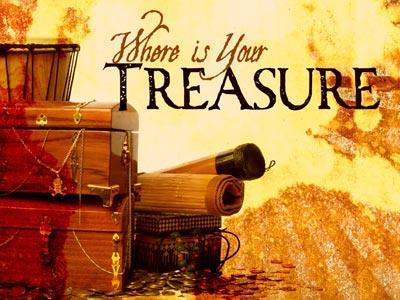 The Rich Young Man. Now someone approached him and said, “Teacher, what good must I do to gain eternal life?”17 He answered him, “Why do you ask me about the good? There is only One who is good. If you wish to enter into life, keep the commandments.” 18 He asked him, “Which ones?” And Jesus replied, “ ‘You shall not kill; you shall not commit adultery; you shall not steal; you shall not bear false witness; 19 honor your father and your mother’; and ‘you shall love your neighbor as yourself.’” 20 The young man said to him, “All of these I have observed. What do I still lack?” 21  Jesus said to him, “If you wish to be perfect,* go, sell what you have and give to [the] poor, and you will have treasure in heaven. Then come, follow me.” 22 When the young man heard this statement, he went away sad, for he had many possessions. 23 Then Jesus said to his disciples, “Amen, I say to you, it will be hard for one who is rich to enter the kingdom of heaven. 24 Again I say to you, it is easier for a camel to pass through the eye of a needle than for one who is rich to enter the kingdom of God. 25 When the disciples heard this, they were greatly astonished and said, “Who then can be saved?” 26 Jesus looked at them and said, “For human beings this is impossible, but for God all things are possible.” 27 Then Peter said to him in reply, “We have given up everything and followed you. What will there be for us?” 28 Jesus said to them, “Amen, I say to you that you who have followed me, in the new age, when the Son of Man is seated on his throne of glory, will yourselves sit on twelve thrones, judging the twelve tribes of Israel. 29 And everyone who has given up houses or brothers or sisters or father or mother or children or lands for the sake of my name will receive a hundred times more, and will inherit eternal life.

30 But many who are first will be last, and the last will be first.

25 December 2014 @ 3:10pm ;
Message 1295
“My dearly beloved daughter, do not concern yourselves with the spirit of evil, which corrupts the world. Leave all to Me. For as long as you love Me, revere Me and love others, according to my Holy Will, I will protect you from the pain of all things that are against Me.

The worst pain you will have to endure will be that of witnessing so called acts of charity and humanitarian concerns on a global scale, which will mask the true intentions of My enemies. You will know, within your hearts, that the deceiver is at work. When the secular world and those who claim to represent Me speak of politics, humanitarian acts but fail to proclaim the importance of preserving human life, at all costs, then know that this is not what I desire. If those who say they represent Me do not speak with the same passion about the evil of abortion, as they do about other acts against humanity, then be aware that something is amiss.

My Father will punish all those who murder His children,including the children who are still being nourished in the womb waiting to be born. The perpetrators of such crimes will suffer a terrible punishment unless they repent of their sins against Him. Those who are of Me and who represent My Church on earth have failed to proclaim the Truth. Murder, including abortion, is one of the greatest sins against God. It takes an extraordinary act of contrition in order to be absolved of such a sin. Why then does My Church not fight with vigour against this sin – one of the most abominable acts of defiance against My Father?Why do they distract you from acknowledging the most serious of sins while they preach about the importance

Humanism is an affront to God because it focuses on man’s needs and not the need to repent of sin before the Creator of all that is. If you ignore the mortal sins, clearly defined in the Laws laid down by God, which lead to eternal damnation, then no amount of compassion for the civil rights of the human race will atone for those sins.

If you believe in Me, and if you serve Me, then you must speak only of the Truth. The Truth is that sin is your greatest enemy – not those who persecute you. Mortal sin, if not repented, will lead you to hell.  If you are in mortal sin and spend time supporting great acts of charity and humanitarian deeds, and do not repent, then your soul will be lost.

Remember the Truth. Do not be misled by talk, acts or deeds of charity when the most important task is to fight mortal sin.The sacred servant of Mine who refuses to remind you of the consequences of mortal sin does not understand his or her mission in serving Me.

You cannot sweep sin under the ground, out of sight, as if it does not exist. No amount of empathy with people who are persecuted in My Name, will make up for the fact thatsinners do not reconcile themselves with Me, Jesus Christ, for the forgiveness of sin.

My dearly beloved daughter, the greatest betrayal of My beloved, loyal disciples – those who will always hold firm to the Truth – will be by those followers in My Church who will fall prey to the great deceit.

So many people, because of their misguided loyalty, will be deceived by the imposter who will seize the reins in My Churches everywhere. Though they may feel uneasy at times, when they hear strange renditions of My Holy Word, which will not be taken in the correct context, they will follow like lambs to the slaughter, the road to destruction. They will lavish praise upon the false prophet and salute him like a great dictator and they will become as one to create a large army. This army will cause the greatest persecution upon their fellow Christians. Brother will fight brother in this terrible battle for the Truth. The number of those who will follow the unholy trinity, comprised of the false prophet, the antichrist and Satan, will be much greater than those who remain true to the Holy Word of God as it was laid down from the beginning.

You, My chosen people, who do not deviate from the Truth, will find this journey difficult. Never, for one moment in your lives, would you have imagined the terrible deceit, which you are about to witness. My enemies are well-prepared, have much influence and are well funded. They have many advantages, but they have not got, on their side, the Power of God. Not only do they not possess the Power of God, My Father, the Almighty One, but they can be struck down at any time by His Will. Sadly, they will draw many souls away from Me and I will allow this as part of the final purification of mankind. This period on Earth will be to separate the good from the wicked.

What do I mean by this? Surely, you will say, the good will be fooled and that this is not their fault. This is true. But, when those who say they are true Christians, accept heresy, instead of My Holy Word, they blaspheme against Me. They are well-aware of the Truth and they must be alert to My Word every second. So many of you are asleep. So many do not truly know Me, because you have no humility in your soul, so proud are you of your knowledge of Holy Scripture. Many of you have failed to read the Gospels or understand what will happen before My Second Coming. You still do not know, yet, that the Truth was given to you, in the Most Holy Bible. Why do you continue to defy the Word of God, argue, reject and fight against the Hand which created you? You are no more informed than those who crucified Me. You have no more knowledge than the Pharisees who believed that their interpretation of the Holy Word of God was superior to that of the Son of Man. Because of your refusal to accept the final prophecies, you will deny Me. All your services to Me will mean nothing, for you will follow the one sent by Satan to deny you your rightful inheritance in My Paradise.

How you make Me weep. How you will betray Me will be reflected in the persecution which you will bring to bear on those you call your brothers and sisters, in My Name. You will become indoctrinated with lies, as others before you were, by wicked leaders and dictators of the past. Because of your lack of real love for Me, which requires great sacrifice, you will bring Me much grief and suffering. While the enemies of My Church will draw you into a web of deceit, you will sing their praises, adore and love those who hate Me and I will be forgotten.

Remember these Words. When you place false gods before Me, you will incur the Wrath of God.