We were warned about the havoc that would ensue, with the election of this “pope”. We were told of his connections and his motives.

A message on the day of the election of the False Prophet:

“ My dearly beloved daughter, I have been condemned to death for the second time. The insult of the ruling in Rome, which you witnessed today, cuts Me in two. …

My Word will be treated with contempt. My Word will be questioned. Doubts will creep in and, once again, My apostles will run away and leave Me to the wolves.

Make no mistake, the Truth has been revealed to you. I have told you, My followers, how you will be deceived. This will be very difficult for you because you will question this imposter who sits in My Father’s House.

My beloved Pope Benedict XVI was persecuted and fled, as foretold. I have not appointed this person, who claims to come in My Name.

He, Pope Benedict, will guide My followers towards the Truth. I have not deserted him and I will hold him close to My Heart and give him the comfort he needs at this terrible time.

His throne has been stolen. His power has not.

In our times, we have seen this happening right before our eyes. He has been slowly chipping away, almost without many people noticing. But a lot of this is the conditioning we have received over the last 50 years, in accepting what appeared to be small things of no great consequence- such as Prayers of the Faithful, standing for Communion, homilies only focussed on the reading of the day. How can this be a problem?  It hasn’t changed our Faith. The Truths are still the same – or so the thinking goes. We have grown blind in the encroaching darkness.

Eight years ago, the False Prophet, started chipping away at things such as the Washing of the Feet on Holy Thursday (NOT imitating Our Lord, in washing the feet o

f His priests, but those of women, prisoners, infidels). There seems to be a direct link between this action  on Good Friday, when He did NOT KISS the feet of Our Lord in the Ceremony of the Cross in the Liturgy of the Cross at 3pm. This FP also mocks the faithful with many names – “Rosary Bead counters”, “breeding like rabbits”.

This man (the FP) has a history of blasphemies and mockery against the Mother of God. Examples are:

He mocks Our Lady, saying that she complained to God at the foot of the Cross; he likened her to a post mistress ( thus mocking her appearances); he said she was angry with Jesus for staying behind in the temp

le for 3 days. He replaced her image and that of St John at the foot of the Cross, with Luther and his mate on a postage stamp.

The FP has undermined the Faith in other ways also: he has, (unofficially of course – very cunningly), denied the existence of hell on more than one occasion – claiming that souls will be annihilated instead. In a sermon  quite soon after his election, he claimed that “man was created a little higher than the angels”. At the time, many made excuses and said it was just a slip of the tongue. At World Youth Day, he told the youth to go out and create “chaos”. (Chaos only comes from one source).

He mocked Our Lady, when on her feastday, the Laudate Si video was projected onto the Vatican building – thus also contaminating it with pictures of pagan gods. He decried “sins against creation” (NOT the CREATOR). He contaminated the Sacrame 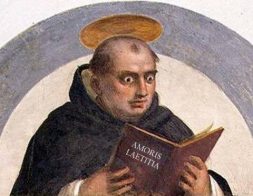 nts of Matrimony and also Penance with “Amoris Laetitia”, which while claiming that it was only a footnote, ended up in the Magisterium through the back door via a letter. It is now teaching – no longer a footnote. 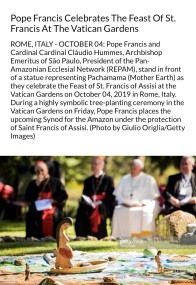 He worshipped and blessed a pagan idol “Pachamama”  (Mother Earth) together with other bishops before, during and after the Amazonian synod: at the consecration ceremony in the Vatican gardens, at the Way of the Cross during the synod, and by putting a pagan ritual bowl on the altar at the closing Mass.

They were all prophesied well before they actually occurred. Check the dates.

See some excerpts from the Book of Truth below: