Comment: We do miss seeing each other, in real space and time, and we particularly miss those who do not have or are not able to manage modern technology. But at the same time. it has enabled us to share our prayer group with interstate and overseas Crusaders, who would not be able to otherwise join us. Today we had 3 interstate and 1 overseas Crusaders to join us. some of them we had met before in our large general meetings/seminars, and others just found us through this site. For this we give thanks to God, Who looks after us on all occasions.

The Bible reading today was from the prophet Ezekiel.  The preceding chapter details a vision he had of Israel. At the end of this chapter the vision gives details about the temple. In our prayer meetings, we always nominate a male to open the Bible. Chapter 41, where he opened , has directions for the nave of the temple. The nave is described with passageways, chambers, terraces. The width of the outside wall and the height of the temple as well as the temple facade is described.

For us, this means the Church – the Mystical Body of Christ and its structures – the height and breadth and width and its important supportive structures and design. The “holy of holies” is emphasized and particularly pointed out. God’s instructions are explicit.

It made us mindful of the blasphemies that occur within our Church today, particularly concerning the Eucharist and the Holy Sacrifice of the Mass. Our churches are closed and our ability to take part in the “Daily Sacrifice” is severely curtailed.

Concerning the readings from the Book of Truth, the person who opened up a book opened up on a page with a reading on the left hand side, and a reading on the right hand side. So we read both. They concern the attempted destruction of Christ’s Church and the evil spirits within who seek to do this. The first reading describes all that is “holy” (see Bible reading) – the Holy Sacrifice and the Sacraments which will be targeted; the second reading describes the battle between Christ’s loyal followers and the evil spirits present in souls who do not love Him (present in new age organizations etc – see readings below) .

Reading from the Bible

“Then he brought me to the nave and measured the posts; each was six cubits wide. 2 The width of the entrance was ten cubits, and the walls on either side measured five cubits. He measured the nave, forty cubits long and twenty cubits wide.

My dearly beloved daughter, I wish that My disciples will embrace the changes, which will lie ahead, without fear. It is because of these changes that man can be purified.

The evil acts of war and the abolition of your rights, brought about to control the way in which your countries are run, will soon come about.  If this final battle between My Father’s Kingdom and the devil and his evil spirits were not to take place, then evil could not be destroyed.

There will be attempts made, constantly, to take over your currencies and your personal access to money. But your prayers can stop these wicked leaders from inflicting this attempt at slavery. These people will destroy My Churches and few will be allowed to offer the daily Sacrifices.Yet, there will be those among them, which will remain standing because of the Grace of God.

They will persecute the Church and cause a big division amongst leaders in the Christian Churches and, yet, there will be priests and clergy still left standing because they will refuse to submit to this pressure.

They will try to stop the Sacraments of Baptism, Holy Communion and Confession and, yet, these faithful and brave sacred servants will continue to serve Me.

Remember your prayers will dilute the impact and severity of these trials. When My chosen souls pray for these acts of Mercy, especially, I will respond to their calls.

My Time, which is entwined with the Divine Will of My Father, is almost upon you

My dearly beloved daughter, My Time on earth may seem to have ended at My Crucifixion, but that was only the beginning.

My Time, which is entwined with the Divine Will of My Father, is almost upon you and, finally, I will come, once again, to envelop humanity into My Sacred Heart.

Much has been achieved, not only by you, My dearly beloved disciples, but by the Faith of My Church in standing up to the persecution inflicted upon My Body on earth by secular governments.

How I love My loyal followers. How much comfort they bring Me, because of their firm and loyal allegiance. The Holy Spirit is rampant in these times and was cast, like a net over humanity, as an antidote to the spirit of evil present in the hearts of men.

Were you, My followers, to see, as I see, the evil spirits who roam the earth seeking a home, you would die of fright. They seek refuge in the human soul and the home they inhabit. Souls who do not love Me, who reject God and who follow false teachings, spread by Satan, including new age organisations – who pose as religious and spiritual organisations – leave themselves wide open to these spirits. Many of these souls would be insulted if they were told that they were carriers of such wicked spirits. They would not believe it, even when they show signs of deep emotional distress. 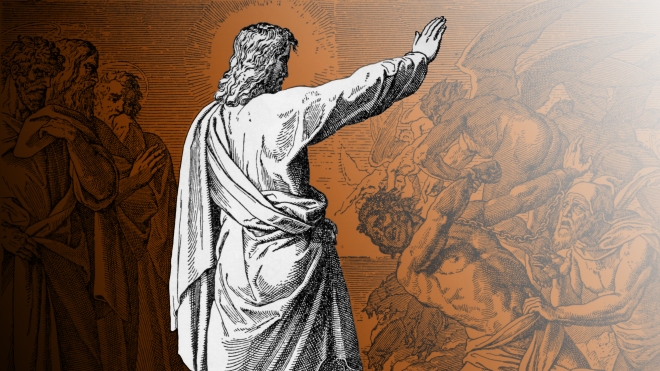 These evil spirits, and there are many, show themselves to Me where they squirm in blackness before Me. I can see them sneering and spitting at Me from their vile mouths. When they are present in God’s children, they transform the person they have entered, albeit slowly, at first. In time, these poor souls, will spew out obscenities against God and the Laws laid down by Him.  They will promote wicked acts, of every kind, and will go to great lengths to seduce other souls into committing sin. As they increase the speed of their infestation, the Holy Spirit, present in the hearts of My followers, will stage a powerful battle to help eradicate this evil. This is why prayer is so important.Your prayers, offered up to stop the spread of evil laws, which offend God, will be heard and acted upon.

Please continue to recite the Crusade Prayer (87) to Protect your Nation from evil and so that evil acts of persecution can be mitigated.

The very strong message  is that in the Old Testament God sent prophets to warn and guide His people. In the same way, today he continues to warn us and guide us. We are weak and easily influenced and need His guidance.

He is our Loving Father and does not want us to be lost!

We must listen to His Voice!