This message today, no longer seems improbable. We have already seen certain aspects. Jesus tells us what is still to come. We must be ready, but so must our priests.  Jesus needs “sacred servants of Mine who remain loyal ” to Him. This warning came very shortly after Pope Benedict was “ousted”. We need good Shepherds to keep away the wolves.

This sign, not to be confused with the Mark of the Beast, will be to symbolise the new One World Religion

My dearly beloved daughter, My Heart heaves as I have to endure the wretchedness and the suffering which the whole of humanity will have to endure. It is not My Hand which will cause this but the curse of Satan, as his spirit roams and devours souls along his path.  So unsuspecting are they to this influence of evil that people blame everything else for their suffering. They place the blame of their hardship upon others and fail to understand that it is the lack of belief in God that creates such havoc in their lives.

As the spirit of the evil one grips humanity, the Light of God will clash with it in ways which will be evidenced by a number of things.

Storms will increase and upheavals will be felt in so many countries. Unrest will be seen  in nations as the power of governments takes away the freedom of the people over whom they govern. Then, the churches, including all those who love God, the one Triune God, will begin to withdraw their services and close their doors. 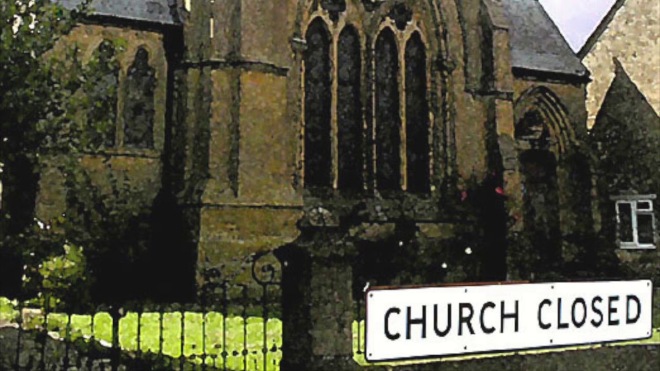 The number of churches which will close down, will be seen, in all western countries. Soon the mark of communism will be seen by a special sign which will appear in churches which remain open; in the media; on items of clothing; in movies and this sign will be proudly worn by those in high places. It will be seen as a badge of honour and flaunted by members of the hierarchies in all main churches and religious denominations. You will see this symbol in public places; on altars; in airports and on the garments worn by leaders in the churches.

This sign, not to be confused with the Mark of the Beast, will be to symbolise the new One World Religion. Those responsible for it will no longer be fearful of displaying their sign, which is a symbol for control and allegiance to the beast.

The day the daily Sacrifice of the Masses are stopped, in the format which they must be offered in My Holy Name, will be the day when this symbol appears on the altars and before all the tabernacles in the world.

Pray, My beloved followers, that you will find solace in those sacred servants of Mine who remain loyal to Me, for you will need comfort during these trials. I will always lift you and carry you. I will never desert you, but you must never deviate from My Teachings, or accept pagan practices as a substitute for the Truth.