On Thursday August 30th , 2018 –  around three-quarters of the church roof of San Giuseppe dei Falegnami (St. Joseph of the Carpenters) caved in; in a spectacular fashion, sending up clouds of dust to be seen from some distance away. It is not clear what caused the collapse, no bomb or act of sabotage was found and restoration work to the church had taken place only three years prior…

The Cardinal of this particular church is Francesco Coccopalmerio.

There are many reasons why God could be angry.

Secondly, Coccopalmerio was one of the high ranking Vatican prelates named by Vigano as participating in the scandalous cover-up of the ‘dossier-thick’ McCarrick abuses.

Thirdly, other articles identify Coccopalmerio as supporting homosexual behaviours saying that we should recognize the ‘positive elements’ of homosexual relationships. It also names him in a specific travesty unconnected to McCarrick. Specifically, that Coccopalmerio advocated (along with Pinto) for the marked lessening of sanctions on convicted child-molester and former priest, Mauro Inzoli.

Coccopalmerio openly supports homosexual behaviour and legal marriage rights. Additionally, he supported the transfer of handling of sex abuse cases away from the CDF although they were being dealt with more quickly, efficiently and harshly there.  Coccopalmerio is also on record as supporting Holy Communion for partners without faith in the True presence (called ‘mixed marriages’; people potentially also in mortal sin) and also for unrepentant sinners through his support of Amoris Laetitia.

Further information about the roof of this church collapsing and the significance of this church, as a symbol, can be found here:

So,  I ask…is it any wonder God is angry?

Well, the date of the roof of this church roof suddenly caving in seems to be symbolic too.

Fr. Kevin M. Cusick (@MCITLFrAphorism) tweeted at 9:10 am on Sat., Sep. 01, 2018:
The roof of Coccopalmerio’s titular church collapsed on the 450th anniversary of “Horrendum illud scelus” on sodomitical clerics, that they should be deprived of their state, turned over to the civil authorities and put to death. 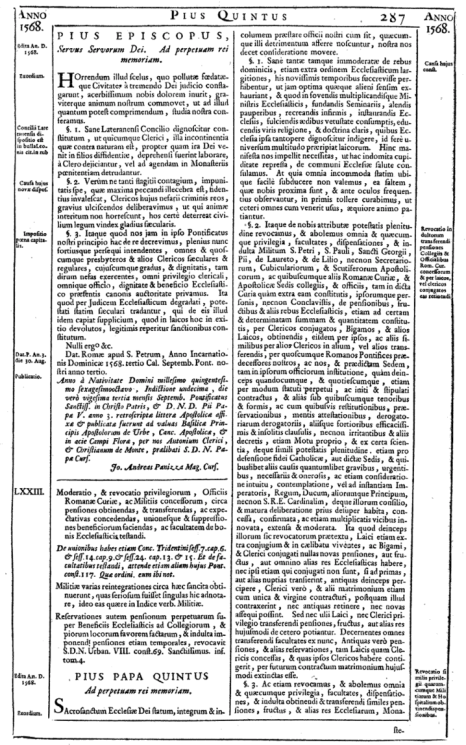 That is, (for us, laymen) a papal bull (or public decree/letter/instruction) issued by St. Pope Pius V on August 30th, 1568, exhorting that all clergy who submit to the (then) crime of participating in homosexual acts, should be immediately removed from the clerical order, be removed of every benefit and dignity and be turned over to the secular authorities for judgement and punishment…

“ § 2. So that the contagion of such a grave offense may not advance with greater audacity by taking advantage of impunity, which is the greatest incitement to sin, and so as to more severely punish the clerics who are guilty of this nefarious crime and who are not frightened by the death of their souls, we determine that they should be handed over to the severity of the secular authority, which enforces civil law.”

The timing of this event (the roof collapsing) also occurred not long after Vigano came out with his explosive testimony revealing the evil in the Church. 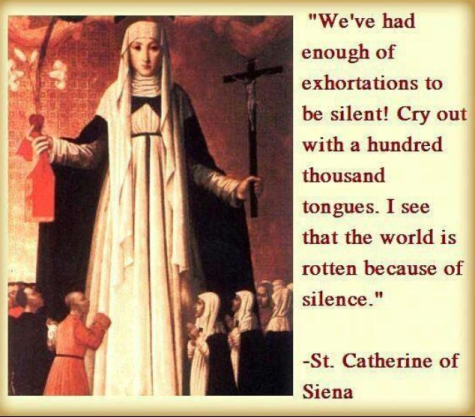 One of the prophecies in the Book of Truth tells us

Furthermore, in this message in the Book of Truth: 23rd September, 2013 given by the Blessed Mother of Salvation she says,

“All those who keep their eyes open and their ears alert, will witness the anger of my Son, in a way in which they cannot fail to notice.”

This brief 30 second video shows the extent of the giant hole in the roof, effectively showing that almost the whole roof has disappeared leaving a gaping hole showing nothing but the sky above.

This is the not the first time that signs have been noticed on the roof of a church, with lightning striking the Vatican at Pope Benedict’s resignation

and a church roof mysteriously collapsing in Malta after the Maltese bishops announced their official interpretation of Amoris Laetitia. 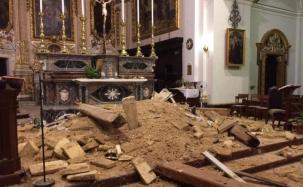 Also on Holy Thursday, March 30th, 2018, chunks of plaster fell from the ceiling of St. Peter’s Basilica just hours after Pope Francis is again alleged (by Scalfari) to have proclaimed that ‘Hell’ does not exist.

Since all of these things go against God’s Commandments and the Teachings of His Church, we can assume God is not pleased. I wonder whether these signs also foreshadow the symbolic destruction of the Temple; after all, the chastisement is clearly already upon us.

However, we must never despair as the Lord purifies His Church and His people but must trust in Him because all these things must come to pass.  In the end, the future is glorious.

And we must remember the role we have to play by prayer and reparation on behalf of all sinners. God does not want to remain angry with His people. He wants to save us and He, Himself will cause this renewal. The Lord reminded me of this when He gave me this passage to read as I was writing this article:

Please read the whole Bible passage and quoted verses as it puts all of this in to perspective.

Link to previous article on this prophecy:

Catholic mother of seven children. Crusade prayer warrior in Jesus' Final Mission to save souls. View all posts by RemnantchildofMary

One thought on “Are we Witnessing the Anger of God’s Son on the Roofs of His Churches?”