Prayers are Groups A & F: (See https://remnantdisciplesjtm.com/crusade-prayer-group-format/ for details).

Samson and Delilah. After that he fell in love with a woman in the Wadi Sorek whose name was Delilah. The lords of the Philistines came up to her and said, “Trick him and find out where he gets his great strength, and how we may overcome and bind him so as to make him helpless. Then for our part, we will each give you eleven hundred pieces of silver.”

So Delilah said to Samson, “Tell me where you get your great strength and how you may be bound so as to be made helpless.” “If they bind me with seven fresh bowstrings that have not dried,” Samson answered her, “I shall grow weaker and be like anyone else.” So the lords of the Philistines brought her seven fresh bowstrings that had not dried, and she bound him with them. She had men lying in wait in the room, and she said to him, “The Philistines are upon you, Samson!” But he snapped the bowstrings as a thread of tow is snapped by a whiff of flame; and his strength remained unexplained.

10 Delilah said to Samson, “You have mocked me and told me lies. Now tell me how you may be bound.” 11“If they bind me tight with new ropes, with which no work has been done,” he answered her, “I shall grow weaker and be like anyone else.” 12 So Delilah took new ropes and bound him with them. Then she said to him, “The Philistines are upon you, Samson!” For there were men lying in wait in the room. But he snapped the ropes off his arms like thread.

13 Delilah said to Samson again, “Up to now you have mocked me and told me lies. Tell me how you may be bound.” He said to her, “If you weave the seven locks of my hair into the web and fasten them with the pin, I shall grow weaker and be like anyone else.” 14 So when he went to bed, Delilah took the seven locks of his hair and wove them into the web, and fastened them with the pin. Then she said, “The Philistines are upon you, Samson!” Awakening from his sleep, he pulled out both the loom and the web.

15 Then she said to him, “How can you say ‘I love you’ when your heart is not mine? Three times already you have mocked me, and not told me where you get your great strength!” 16 She pressed him continually and pestered him till he was deathly weary of it. 17 So he told her all that was in his heart and said, “No razor has touched my head, for I have been a nazirite for God from my mother’s womb. If I am shaved, my strength will leave me, and I shall grow weaker and be like anyone else.” 18 When Delilah realized that he had told her all that was in his heart, she summoned the lords of the Philistines, saying, “Come up this time, for he has told me all that is in his heart.” So the lords of the Philistines came to her and brought the money with them. 19 She put him to sleep on her lap, and called for a man who shaved off the seven locks of his hair. He immediately became helpless, for his strength had left him. 20 When she said “The Philistines are upon you, Samson!” he woke from his sleep and thought, “I will go out as I have done time and again and shake myself free.” He did not realize that the LORD had left him. 21 But the Philistines seized him and gouged out his eyes. Then they brought him down to Gaza and bound him with bronze fetters, and he was put to grinding grain in the prison. 22 But the hair of his head began to grow as soon as it was shaved.

Tells the story of Samson (God’s chosen race) and the enemy (Delilah). The enemy pestered and plotted against Samson continually until Samsonwas tired and weary and, in a moment of weakness, told the enemy what they wanted to know. He was persecuted (eyes gouged out) and imprisoned. But his hair ( the source of his strength) started to regrow. The Christian remnant today will also be similarly pestered and persecuted when we let our guard down. But our strength (Faith in the Lord) will regrow – so that we can fight another day.

My dearly beloved daughter, do not allow My Revelations to cause you grief or fear. You are being guided and even when the suffering becomes intolerable, please remember My Words.

My Father promised, through the prophets of old, that He would send the final prophet, the final messenger. No matter how fearful this may be or how terrified this makes you feel, know that it is by this act that the Final Covenant of God can be brought to fruition.

I tell you now, fear those of you who insult the Word of God. Cast your eyes down and cover them with your hands, particularly those of you who spit in My Face, at this time, because of these, My Messages of Reconciliation. You are not worthy to stand in My Presence. You who mock Me now will fret and continue to fret until the Great Day, for you will have lost Me the souls I so desire.

To My sacred servants, who sneer at My intervention, through these Messages, your day will come when I will ask you this. While you spent so much of your time denying My True Voice, how many souls have you sent to Me? And how many have you turned away from Me by those acts, by which I will Judge you? 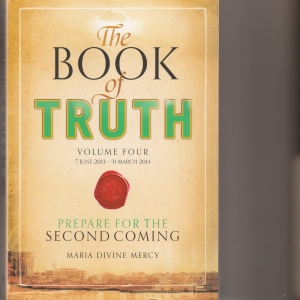 Those among you, who shout blasphemy against the Holy Spirit, know that before the Great Day, and as a sign to all, you will be struck down. Not one word will escape from your lips and by this deed, you will be known amongst your flock – the same flock you told to ignore these Messages, for they do not come from God. On that day, your followers will know the Truth and you will fall before Me. I make no apology for this warning. If you defile the Word of the Holy Spirit, I will cut you off from Me and there will be terrible cries by you and all those you will bring with you into the wilderness.

My Justice will befall all those who prevent the Holy Word of God from being made known in the world. Theirs will be the worst punishment, for the pain they will experience will be worse than those in the lowest level of Purgatory. Your wickedness shocks many good innocent souls, who are faithful to My Church on Earth. Your cruelty, which will be revealed in time, will be seen by many and then your true allegiance to the Word of God will be finally tested. Then you will stand before Me on the Great Day when I come to reclaim all of God’s children – when I come to free them from exile and take them to their final home of Love and Peace into the New Era of My New Paradise. This is when Heaven and Earth become one.

My dearly beloved daughter, it is My desire, not to frighten My followers, but rather, to demonstrate the Love and Compassion which I hold in My Heart for every man, woman and child.

It is because of My Love for every one of God’s children, including those who defy the Word of God, that I wish to cover them with My Flame of Mercy.

e prepared, all of you, for soon you will witness the Power of God and His Divine Intervention in the world, when He will stop all that is, for a period of fifteen minutes.

The Fire of the Holy Spirit will be felt in the hearts of everyone.

For those who are in a state of grace, it will be a feeling of joy, love and compassion for Me, your Jesus.

For those in a state of venial sin, you will feel the pain of Purgatory, but you will soon be purified and then you will feel a deep peace and love within your hearts for Me.

For those of you in mortal sin, you will experience the wretchedness and pain as if you have been plunged into the fires of Hell.

Some of you, in this state of sin, will beg for My forgiveness and favour to stop your internal suffering. This I will grant to you if you can find true remorse in your heart and accept that your sins cause Me grievous hurt and pain for they insult God.

Then there will be those poor unfortunate souls who will spit at Me, fight with Me and then turn their backs. The terror, they will feel, will be because their souls are infested by Satan.

They will not be able to stand the pain when they witness My Light and they will run into the embrace of the evil one whose darkness brings them comfort.

Finally there will be those who will die instantly because of the shock they will experience. Please pray for these souls every day, for your prayers will gain for them entrance to My Kingdom.

This is one of the greatest miracles ever accorded to God’s children.

My Revelation to you, during this event, will wake you up to the fact that My Promise, to come back to save the human race so they can inherit the Glorious Life ahead, will soon be realised.