There has been a lot of speculation about what may or may not be in the Third Secret of Fatima. Most people do agree though that the 3rd secret in its entirety has not been revealed to the world. The contents shown to us which are supposedly the third secret do not match the suggestions in Sr. Lucia’s diary, nor the length and handwriting of the real 1 page letter which eye witnesses claim to have seen, nor is it plausible that the contents (as supposedly revealed in June 26th, 2000) could cause so much concern and horror as to warrant keeping them secret longer than instructed by heaven. To do so, suggests that a lot of fear surrounded the actual Third Secret or that the pope who refused to release it was complicit in its exposure of Freemasonry (Pope John XXIII).

If you need to catch up on the reasons supporting the fact that it has not been fully revealed, please read here: https://sspx.ca/en/news-events/news/fatima-secret-dangers-threatening-faith-15980 for a quick summary.

Now, although I have not seen the Third Secret’s words, as given to Sr. Lucia, I can tell you more of what’s in it than what others have speculated. I can do this because more information is revealed in The Book of Truth. And, as Pope Benedict said in his address about that secret, it contains what has already been contained in many Marian apparitions before about the future of the Church. That is interesting if we actually read what those other approved apparitions describe to us.

The Third Secret is intertwined with the fact that there are two popes. These are the two stumbling blocks that keep the majority of people unable to comprehend the seriousness of the state of the church and its leader at this time.

What do we discover about the Third Secret in the Book of Truth?

“My child, the deceit, which the world will face, will be so difficult to discern, that only those who surrender to God and place all their trust in my Son, will be able to endure the trials, which lie ahead.

I gave the world the prophecies in 1917, but the last secret of Fatima was not revealed, so terrifying was it for those within the Catholic Church.

The last secret of Fatima still remains unknown to God’s children, although part of it was revealed to you on 26 January, 2012.  Very few within the Church are privy to this. Now, the next part of the final secret of Fatima must be revealed, so that I can warn humanity of the consequences of ignoring my intervention to help save souls.

The Church has been infested, from the inside, by enemies of God. They – and there are twenty of them who control from within – have created the greatest deceit. They have elected a man, not of God, while the Holy Father, accorded the Crown of Peter, has been carefully removed. 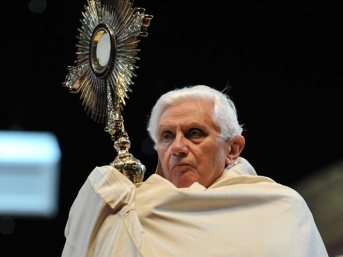 The details, which I revealed, are that there would be two men wearing the Crown of Peter in the end times.

One will suffer because of lies which have been created to discredit him and which will render him a virtual prisoner.

The other one elected will bring about the destruction, not only of the Catholic Church, but of all churches which honour my Father and who accept the Teachings of my Son, Jesus Christ, Saviour of the world.

There can only be one head of the Church on Earth, authorised by my Son, who must remain pope until his death. Anyone else, who claims to sit in the Seat of Peter, is an imposter. This deceit has one purpose, to turn souls over to Lucifer and there is little time for such souls, who will be none the wiser, to be saved.

Children, you must only heed one warning, now. Do not deviate from the Teachings of my Son. Question every new doctrine, which may be presented to you and which professes to come from my Son’s Church on Earth. The Truth is simple. It never changes. My Son’s Legacy is very clear. Do not allow anyone to cloud your judgement. Soon the Fatima prophecies will make sense. All is now taking place before a disbelieving world, but sadly, very few will understand until it is too late.

Pray, pray, pray my Most Holy Rosary, as often as possible, every single day, in order to dilute the effect of the evil, which surrounds you.

The second message referred to (above) is this one:

This is the extract from Jesus, regarding Fatima:

“My dearly beloved daughter, it is time for the full Truth of the Mysteries of the Divine Realm to be revealed to the world. The Truth has been hidden for some time.

Acknowledgement of My Divine Intervention in the world through the miracles, apparitions and Divine Communications to chosen souls, has been pushed to one side by My Church, for many years.

Why My Church felt the need to dampen the Truth, when it was needed to strengthen the faith of My children everywhere, is known only to them.

Every true visionary of Mine and My Blessed Mother was ignored in the beginning and treated with contempt by My Church.

My daughter, even the final secret of Fatima was not given to the world, because it revealed the truth of Satan’s evil sect entering the Vatican.

The last part of secret has not been revealed, in order to protect the wicked sect who entered the Vatican in great numbers since My Mother’s appearance at the Holy Shrine of Fatima.

My daughter Lucia was silenced by the powers, which control part of the Vatican, over which My poor beloved popes have little control. Watch how they have, not only twisted the Truth of My Teachings, but, introduced new methods of Catholic worship, which insult Me, and My Eternal Father. The Catholic Church is the One True Church and as such is a primary target of Satan and his wicked sect. The Truth comes from Me.

The Truth makes mankind uncomfortable, because it can involve personal sacrifice. The Truth causes outrage in some instances and, in many cases, is treated as heresy. Yet only the Truth can set you free from lies, the lies, which come from Satan, and which create a heavy burden on your soul.

The time has come for the Truth to be unveiled in a world which is full of lies.

So many lies, My daughter, have been presented to My children by false religions, false gods, false church leaders, false political leaders and organisations, as well as a false media.

So much of the Truth is hidden. Yet, if the Truth of what is happening in the world were revealed today, very few people would accept it…”

To see how this links with La Salette and other prophecies, see our other posts at:

“Fr Gobbi and the Book of Truth: The 3rd Secret and the Papacy” posted on 17 Sept. 2016  https://remnantdisciplesjtm.com/category/prophecies-through-the-ages/page/1/

“A comparison of Fr. Gobbi and the Book of Truth” posted on 15 Sept. 2016 https://remnantdisciplesjtm.com/category/prophecies-through-the-ages/page/1/

The next post will deal with the second stumbling block- “two popes”.