Prayers are Groups A & B: (See https://remnantdisciplesjtm.com/crusade-prayer-group-format/ for details).

This reading is about Judah who left his brothers and while out, noticed a Canaanite woman whom he married and bore children with. This woman had 3 sons. The first 2 greatly offended God and the Lord took their lives. He promised the widow of the first son, Tamar, to the second son and then to the third son (in marriage) if she waited in her father’s house till he was fully grown.

However, Judah did not fulfil his promise, and while out to shear sheep, he passed Tamar sitting by the way. She veiled her identity and  mistaking her for a prostitute, he had intercourse with her, not realizing it was his daughter-in-law. She obtained from him his seal, cord and staff. When he went to give payment, he could not find the ‘prostitute’.

Three months later, Judah was told that his daughter-in-law had acted as a harlot and was pregnant. He resolved to kill and burn her. But then she presented to him his cord, staff and seal, showing him that it was by his own hand. his own wrongful deeds. He admitted that she was in the right because he had not kept his promise to her. Finally he could see how he had displeased God. In fact, Judah had been chastised by The Lord several times already, as his sons did what was wicked in the sight of The Lord. Now, he is brought to realize his own unrighteousness through Tamar, whom he recognizes is more righteous than he is, himself. If he formerly considered her as deserving of death, he now must see what he, himself, deserves. He does not lie with Tamar again.

In this reading, I can see  the offending of God, deception and broken promises. The one thing that stands out to me is Judah’s staff, seal and cord – these seem to be items of identification and perhaps authority.

Judah is one of the 12 tribes of Israel, so perhaps we could consider how this concerns the Church; especially in the large scale turning away from God. Also in regards to certain priests and bishops who have abused their authority, or in some cases, even did (or are doing) what is wicked in the sight of The Lord. May God grant them (and us) enlightenment in regards to their offences, contrition and spare us the ‘final burning’ we deserve.

My dearly beloved daughter, every living soul has a powerful instinct to seek out God in their lives. Those who find the Love of God in its most pure form are given this Gift because of their humility and acceptance of the fact that all Glory belongs to God.

Pagans, on the other hand, in their q

uest for spiritual peace, seek out the Creation of the True God, rather than their Creator. Instead of laying themselves before God, My Father, the Almighty, Creator of all things, they lie prostrate before false idols, including the wonders He created for the world – the Earth, the sun, the moon and the stars. They idolize these great wonders and then believe that by doing so, this gives them great powers. What they are seeking is a form of spiritual enlightenment, which they hope will bring them pleasure and peace. Many then, through meditation and yoga, open their minds and souls to allow the spirit of evil to corrupt them. They mistakenly believe that some other power, other than that which comes from God the Most High, can bring them the peace, which they crave.

Know now that there is only one God. Any other form of adulation amounts to paganism. It does not matter what they say or how they justify their actions, they are inviting Satan to invade their souls and once he gains access, he and the demons he sends will not leave those souls alone. They will torment these souls, fill them with lies and have them believe that they possess a gift. Some believe they can heal others, through practices such as Reiki, when what they do instead is infest others including the innocent. When pagans chant, to attract spiritual gifts, they say that this brings them peace. While many believe this, know that within a short period of time – once the spirit of evil has entered their minds – they will become agitated and no respite will they find. Every pleasure of the senses is constantly sought out by them and all they will receive in return will be a darkness of the soul.

Paganism brings a terrible disquiet and, in lands where the heathen cry out to the false gods, they incur the Wrath of My Father. Many such souls do not understand what they are doing, but recognise them by the ways in which they will adorn their bodies, as they consider themselves sacred vessels in the eyes of the false idols they claim to worship. Love, humility or personal sacrifice for the good of others, will be lacking, for they only worship the senses. They do not understand that their souls are a Gift from God and so they give them away in the pursuit of perfection, which can never be theirs.

During The Warning, I will awaken within these souls the Truth as to Who they belong to. Pray that they will accept My Hand of Mercy. Woe to those Christians who have deserted Me in favour of new age paganism. They are the ones who do not want My Mercy and would prefer to dabble in nonsense, because it feeds their egos when they believe that they have the power to control matters of spirituality. While they seek personal perfection in this way, they cut themselves completely from God. By doing so, they open the door to the evil one, who will seduce and hypnotise them through the appeal of superstitious promises, which lead to their souls becoming barren where the Love of God cannot thrive. 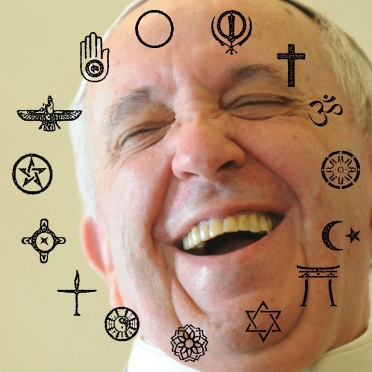 My Church on earth is under attack and this means that My Body will be Crucified again, as foretold

My dearly beloved daughter, fear not the attacks, which are being mounted against you, for I Am with you every second to make you stronger. It saddens Me to tell you that you will suffer much verbal abuse, because of the timing of this, My Plan of Salvation.

For this is the time in which, not only will fervent Catholics be tested in their faith and their allegiance to Me, it will also be the greatest trial for all Christians in every part of the world.

To those who accuse you of heresy, I say this. I, Jesus Christ, would never lie, for I Am the Truth. I could never deceive you, for that would not be possible. Remember, it is My Body, which is the Church. My Church on earth is under attack and this means that My Body will be Crucified again, as foretold. By this, I mean, that My Body will no longer be Present, the minute the Holy Eucharist is discarded by ministers in the Holy See of Rome. This will become a reality and you must turn your back.

Wake up, all of you, and listen to what I must tell you. You must not panic, despair or lose hope, for this abomination will be the final torment, which all God’s children will have to witness and endure before I come again.

That will be the day of Great Glory, Great Joy and My Coming will bring to an end the evil, which blights the earth.

Instead of fear, be joyful. You must look forward to My Second Coming, because I bring with Me, the New Paradise, promised to you.

When you carry My Cross it will always be difficult. The times in which you live now, bring with them a form of crucifixion, which most Christians will find very difficult to endure – so great will their pain be.

Those poor souls, who do not believe that I speak the Truth, through these Messages, must ask themselves this. Do you believe in the Holy Bible and the prophecies declared within its covers? Do you believe in the antichrist and the revelations about the false imposter who will take the Seat of Peter through devious means? If you do, then accept that this is the time for these events to unravel before your eyes. It is not for the future – it is now taking place. Accept this with courage and come to Me with complete trust, for I love you. I need you to keep your eyes wide open. You must not shy away from the Truth.

The abomination has now begun.  When you refuse My Cup, you prevent Me from salvaging the souls I need to complete the Covenant promised to My Father.

I bless you. I long for your hearts to open, so that I can take you into My Glorious Kingdom.