Cardinals give a clue

He refers to two statements by Cardinal Müller:

“On the Synodal Process in Germany and the Synod for the Amazon,” (posted on LifeSiteNews)  at https://www.lifesitenews.com/news/cardinal-mueller-no-pope-or-council-could-permit-female-deacons-it-would-be-invalid

Steven O’Reilly, in the first article, discusses specific statements made by Cardinal Müller in the other two articles.

He discusses the legal situation of an hypothetical “ex-cathedra statement” and the implications of this. He comes to a surprising conclusion.

The post below contains extracts from Steven O’Reilly, but the subheadings are mine. There was so much to take in, that this is how I made it clear to myself.

Click on the articles above to read them in full 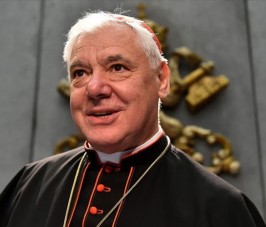 In the most recent commentary, rejecting the possibility of female deacons, Cardinal Müller writes the following :

“The Magisterium of the Pope and of the bishops has no authority over the substance of the Sacraments (Trent, Decree on Communion under both species, DH 1728; Sacrosanctum Concilium 21).

“Therefore, no synod – with or without the Pope – and also no ecumenical council, or the Pope alone, if he spoke ex cathedra, could make possible the ordination of women as bishop, priest, or deacon. They would stand in contradiction to the defined doctrine of the Church. It would be invalid. Independent of this, there is the equality of all baptized in the life of Grace, and in the vocation to all ecclesial offices and functions for which exercise the Sacrament of Holy Orders itself is not necessary.” (On the Synodal Process in Germany and the Synod for the Amazon by Cardinal Gerhard Müller, text posted by LifeSiteNew, 7/26/2019)

Cardinal Mueller’s advice to the faithful if such an event occurs:

The first — obviously — what the Cardinal says explicitly, i.e., that such an “ex cathedra” declaration, in the Cardinal’s mind, would be invalid, and thus should be disregarded by the Faithful.

But what about papal Infallibility? (the bad news)

There is an obvious difficulty in that  Vatican I defined the dogma of papal infallibility in the following terms:

“…the Roman Pontiff, when he speaks ex cathedra, that is, when carrying out the duty of the pastor and teacher of all Christians in accord with his supreme apostolic authority he explains a doctrine of faith or morals to be held by the universal Church, through the divine assistance promised him in blessed Peter, operates with that infallibility with which the divine Redeemer wished that his church be instructed in defining doctrine on faith and morals; and so such definitions of the Roman Pontiff from himself, but not from the consensus of the Church, are unalterable.”  (Pastor Aeternus cited in Fundamentals of Catholic Doctrine, Denzinger, 1839)

In addition, this definition is followed by a canon, which states:

“But if anyone presumes to contradict this definition of Ours, which may God forbid: let him be anathama” (Denzinger 1840).

Then why would Cardinal Müller state that such an ex-cathedra statement could be disregarded? (The good news)

“… But, the Cardinal is no dummy as to suggest ex cathedra statements can be disregarded. This suggests, to me at least, a hidden, unstated and inescapable implication in the Cardinal’s statement, as well as being an indication of how he and other Cardinals are now privately viewing Pope Francis–though this is speculative.”

What are the logical implications (according to Steven O’Reilly)

“… Given that a true pope is protected by the Holy Spirit from teaching an error ex cathedra, it follows that if a man, seemingly “pope,” were to teach something which denies or conflicts with a known truth of the Catholic Faith it must be either

(1) the man thought to be “pope” was never a true pope to begin with, or

(2) the man thought to be “pope” had, at some point in the past, already fallen through heresy or apostasy from the Petrine office.

Steven O”Reilly: Reading between the lines

…. It does suggest, along with other statements from the likes of Cardinal Brandmuller, that some in the “resistance” are reaching the point where they can bend no more.”

Postscript (added Jan 2020): It has now been definitively proven that Benedict never  renounced the ‘munus’, which means he never validly renounced the papacy at all. This of course means he is still the pope and Bergoglio is nothing now, nor ever was, anything- except for a heretical bishop who should be automatically excommunicated. Further information on this is available at the FromRome blogsite.