People – faithful Catholics as well as the secular world applaud (pope) Francis and his statements and policies. He has taken up the cry of “climate change”, and the care of the “environment”. He has sided with the secular world and is promoting policies that are more political than religious. He has gone so far as to speak of “the sins against creation” , has been welcomed and praised by the U.N. and has even signed the 28 Sustainable Goals. (One of these is Depopulation!)

In other words, he thinks man is in charge of the environment. 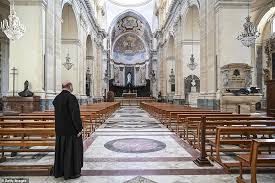 The other very worrying thing is the current virus and declared health emergency. Sure we have to support the bans and be cautious, but when essential services do not include that our Churches should be open, some are beginning to complain. In many cases, bishops have gone beyond the necessary restrictions and closed churches completely. This is unneccessary when we can easily abide by sensible health precautions and still keep Churches open. As a result, the Faithful are being deprived of the Food of Life. The Food of Life is not only the Eucharist, but the Word of God which is taught to us by our priests at Mass. We have been shut out of our churches – away from attending Mass. This has never happened before.  Fear has been put before Faith. There could be multiple Masses each day- where someone is standing at the door and only letting in 10 people at a time and ensuring the correct “social distancing” once inside.

Why were we all- and bishops most of all – quick to accept, the current situation?

I found 2 messages today, while perusing through my files where Jesus explains about Climate change and the environment. He explains how politics will pull Christians away from Him. In the other message I found, God the Father explains about the “new evangelisation” and how our Faith will die without the “Food of Life”.

Remember, that last year in 2019, Pope Francis announced a “new Humanism” and a “new evangelisation” which is to come. In October 2017, the Pope Video for the month was on secular humanism. There is nothing about salvation or the Faith or Jesus Christ in his video. Merely some human rights with which any atheist would likely agree. What about the rights of Jesus Christ our King? Totally forgotten.

But that is what the one-world church will teach – humanism.

Messages from the Book of Truth

The only danger to humanity is man himself

My dearly beloved daughter, the person who perseveres in prayer will become closer to Me.

With so much confusion in the world and amongst My Church on earth, the challenge for humanity is to be able to differentiate between right and wrong in the Eyes of God. But, for many Christians, they will be drawn away from Me by a new global form of evangelisation, which will focus exclusively on politics. Instead of being encouraged to remain loyal to Me and trusting in all that I Am, you will be pulled away from Me. You must never confuse My Word with the aspirations of a secular world. I have always made it clear to humanity, through My Father’s Book, of the dangers in doing so. A secular world serves only its own needs and men of power, ambition and selfish aspirations create the rules, which govern it.

So much misinformation has been spread in relation to the environment, when only God can dictate how the earth behaves. Man may harm and damage the earth but he can never destroy it, for all these things are in the Hands of God. A lack of trust in God means that man believes he has control over the universe. The foolish man thinks that his actions can change God’s Laws. The

wise man knows that God is all powerful and as long as He is revered, and His Laws adhered to, then man’s survival will be secured. The survival of the earth has nothing to do with mortal man. Only God has the power to control the air that you breathe; the water you drink and the ability to sustain life. The only danger to humanity is man himself.

Man will fool others in the interests of self-gain. He will lie if it is to his advantage and when it suits him. Trust is easily broken and now you are living in an era where you must know that the earth will remain as it was before and that any climate upheaval is by the Hand of God. Man’s intervention in such a divine creation will only be permitted if it is according to the Will of God.

My Church is My Body. All those who believe in Me are part of My Body. Those who are part of Me will follow My Teachings. Those who say they lead My followers must abide by the Word of God. Their role is to defend the Truth – not deviate from it.

If you are being pulled away from Me, and if My Word is being rejected by the world, then the duty of My sacred servants is to remind the world of what is right and what is wrong. When they remove themselves from matters, which concern the soul in exchange for matters, which amount to socialism, then know that this is a subtle and cunning deception.
It also betrays all trust in Me.

God the Father: The famine, which will grip the world as the Third Seal is opened, will not be confined to the lack of food

My dearest daughter, the famine, which will grip the world as the Third Seal is opened, 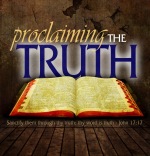 will not be confined to the lack of food for the body. The famine I speak of will be starvation of the spirit, as every trace of the Truth will be erased by the enemies who infiltrate the Church, created on Earth by My Son, Jesus Christ, in union with His Body.

Soon, the Truth will become confusing and the Holy Spirit will be replaced by the spirit of evil. Those who will spread the new form of false evangelisation will be responsible for withholding the Food of Life from My children. When you are starved of the Truth, you will have little to nourish your soul and then, in time, you will fall into paganism. I Am intervening in every step of the process by which you will be led into error. Every effort will be made by Me and I will, through My Son’s Mercy, bring many of His sacred servants the Graces they need to discern Truth from fiction.

As I draw you away from the enemy, many of you will find it difficult to remain true to the Word of God. You will be tormented by doubts, lack of courage to adhere to the Holy Word and a terror of being declared a traitor to the Church. The battle for souls will be as intense, as it was during My Son’s Time on Earth. The greatest difficulty will be brought about because of the failure on the part of My Son’s holy servants to detect deceit within their own ranks. And so, they will, because of their lukewarm faith and lack of discernment, lead many of their fellow clergy into serious error, as foretold.

I declare to you that time is short. There will not be accorded to you the time needed to draw all of My children into the Merciful Arms of My Son. To those of you who are privileged to have been given the Grace to acknowledge the Gift of the Book of Truth, much will, therefore, be expected of you. Through your faith and trust in Me, your beloved Father, you will help to lead My children back, so that they will readily accept the Intervention of The Warning, when My Son embraces the world within the Rays of His Great Mercy.

Those times are upon you and it is time to take up your armour and fight for the True Word – the Truth – to be retained. Without the Truth there is no life.

Today, in this country we celebrate a very important day for us – ANZAC Day. In his sermon today, Father reminded us about what true peace entails. He spoke of how only forgiveness could bring true peace, but this is based on truth. He quoted the Lord’s Prayer –  “Thy kingdom come, Thy Will be done on earth as it is in heaven.” then  “forgive us our trespasses as we forgive those who trespass against us”.

He said we have to pray for a new world of peace – one based on Truth –  where God’s Will is done on earth as it is in Heaven.

Heaven is worth fighting for and we have to fight to the end!