CCC on the Eucharist:

No. 1324: “The Eucharist is ‘the source and summit of the Christian life.’(Lumen Gentium 11) The other sacraments, and indeed all ecclesiastical ministeries and works of the apostolate, are bound up with the Eucharist and are oriented toward it. For in the blessed Eucharist is contained the whole spiritual good of the Church, namely Christ himself, our Pasch.” 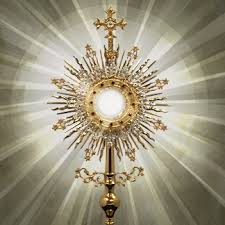 Many of Our Lady’s apparitions have a Eucharistic component (as messages, healings, or events). 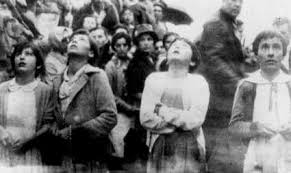 “Conchita, why do you not visit my Son more often in the tabernacle? He waits for you there day and night.” 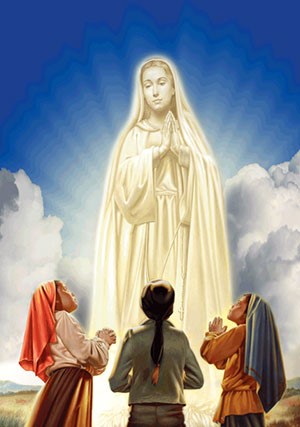 This apparition on the 21st August was seen by 15 people over a period of a few hours. The age of the people ranged from 6 to 75, and included men and women. The public vision included Our Lady, St. Joseph, St. John the Evangelist (as a Bishop), and a Lamb on the altar, with a Cross behind it; angels hovering around it. No words were spoken

Messages to Father Gobbi (an Italian priest) occurred whilst on pilgrimage to Fatima;- while he was praying for priests who had given up their vocations and who were forming themselves into groups of rebellion against the Church’s authority. 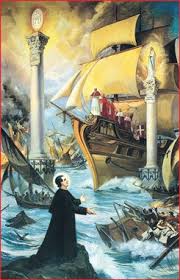 His famous prophetic dream depicts a ship in a storm at sea. Enemy boats were trying to attack and sink the ship. The Captain dressed in white was first wounded then killed, while trying to steer the ship towards two pillars. On one of these stood Our Lady, and on the other a Eucharistic Host.

On top of one pillar is the Immaculate Virgin, with a placard at her feet which says  Mary, Help of Christians ; on the other pillar which is much higher and bigger, stands a Host of great proportions with the words: Salvation of believers. 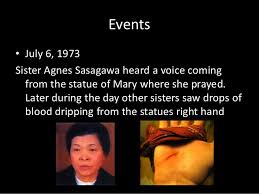 Sr. Agnes lost her hearing in March 1973, and was diagnosed with incurable deafness. On 30th May, 1982, Sr Agnes deafness was cured, after praying 3 Rosaries, as directed by her guardian angel. This occurred instantly and completely, during Benediction of the Blessed Sacrament.

Our Lady and the Eucharist are inseparable. She herself was the Ark of the Covenant. She is always there with her Son. She is our Mother also, and guides us. In her apparitions, there is always Eucharistic influence, or events, or miracles.

Our Lady said to Conchita at Garabandal:

“Conchita, why do you not visit my Son more often in the tabernacle? He waits for you there day and night.”

Read  “The Importance of the Eucharist: Part 2 – What did Vatican II do to Belief in the True Presence?“  in the next post.

One thought on “The Importance of the Eucharist: Part 1 – Our Lady’s Apparitions”