La Salette, Knock and the Book of Truth (Part 2)

It had been pouring rain all day on 21st August, 1879. In the evening, 15 local people saw the apparition of Mary, St Joseph, St John the Evangelist, and a lamb standing on an altar before a cross, in front of the parish church’s gable wall.

The vision was very clear. It stood out from the gable wall of the church, and was about 2 feet from the ground.  To the west of it appeared the Virgin Mary, St. Joseph, and St. John.

The vision lasted for about two to three hours and then faded. 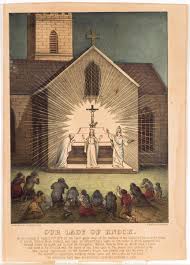 Our Lady was in the centre of the apparition and was the tallest of them all. She was wearing a large brilliant gold crown and was clothed in white garments. Her hands were raised in prayer and her eyes gazed toward heaven.

To her right was her spouse, St. Joseph, whose head was inclined toward her.

To her left was St. John the Evangelist, who was attired as a bishop wearing a mitre and was holding a book, (perhaps his book of the Apocalypse) in his left hand. His right hand was raised as if he were preaching.

To the left of St. John was an altar on which stood a cross and a lamb surrounded by angels.

Though it was raining, the ground beneath the vision was dry. The constant rain represented the sorrow and the tears relating to Our Lady, the Church and the world.

The enigma of the apparition at Knock was its silence.  There was no message given, unlike at other apparition sites.

The unspoken message was one of love and solidarity with the perseveringly faithful Irish in their time of suffering and sorrow. They had suffered famine and potato blight since 1847. https://www.catholicworldreport.com/2018/08/21/the-unspoken-message-of-heaven-at-knock/

What could all this mean?

It was a silence of prayer, of doing penance and of placing ourselves at the foot of the Cross and being in union with Christ’s sufferings.  It is to let us know that Jesus is with us in our times of suffering and sorrow.

La Salette  and Knock are connected

Knock and Book of Truth are connected and inter-related:

In the end, all of God’s prophecies (through His Mother and other chosen souls) will be fulfilled: Quito, La Salette, Leo XIII, Knock, Fatima and others.

These heavenly interventions are to guide us
and support us through these times.
They are a sign of God’s Love and Mercy!