The destruction of the Catholic church has long been prophesied that it will come from within! Who could have ever thought such a thing? We trusted in our popes, cardinals, bishops and priests. They could not lead us astray!

Yet we were warned!!! 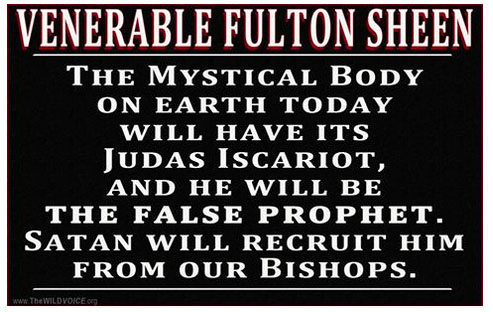 “…this great apostasy is spreading more and more, even  through the interior of the Catholic Church. Errors are being taught and spread about while the fundamental truths of the Faith, which the authentic magisterium of the Church has always taught and energetically defended against any heretical deviation whatsoever, are being taught with impunity” Destruction will come from within

“…The Church and altars will be vandalized. The Church will be full of tose who accept compromises d the demon will press many priests and consecrated souls to leve the service of the lOrd.”

“The mystical body on earth today will have its Judas Iscariot and he will be the false prophet. Satan will recruit him from among our bishops.”

“satan rules even in the highest positions and determines the direction of things. He will succeed in worming his way even into the highest summits of the Church,…”

“,,,there hardly remain a hundred or so priests who have not been deceived. They all work for destruction, even the clergy….”

“ It took nearly two millennia for the enemies of the Catholic Church to realize they could not successfully attack the Church from the outside. Indeed, countless nemeses from Nero to Napoleon succeeded only in creating sympathy and martyrs for our Catholic Faith.

That all changed in the mid-19th century, when clandestine societies populated by Modernists and Marxists hatched a plan to subvert the Catholic Church from within. Their goal: to change Her doctrine, Her liturgy, and Her mission.

In this captivating and carefully documented book, Dr. Taylor Marshall pulls back the curtain on their nefarious plan, showing how these enemies of Christ strategically infiltrated the seminaries, then the priesthood, then the episcopacy, and eventually the cardinal-electors – all with the eventual goal of electing one of their own as pope.

You’ll come to see that the seemingly endless scandals plaguing the Church are not the result, as so many think, of cultural changes, or of Vatican II, but rather the natural consequences of an orchestrated demonic plot to destroy the Church.”

The document details an alleged Masonic plan to infiltrate the Catholic Church and spread liberal ideas within it. …

“It is corruption en masse that we have undertaken: the corruption of the people by the clergy, and the corruption of the clergy by ourselves; the corruption which ought, one day to enable us to put the Church in her tomb. I have recently heard one of our friends, laughing in a philosophic manner at our projects, say to us: “in order to destroy Catholicism it is necessary to commence by suppressing woman.” The words are true in a sense; but since we cannot suppress woman, let us corrupt her with the Church, corruptio optimi pessima [the corruption of the best is the worst]. The object we have in view is sufficiently good to tempt men such as we are; let us not separate ourselves from it for some miserable personal satisfaction of vengeance. The best poniard with which to strike the Church is corruption. To work, then, even to the very end.”

“Another aspect is the Communist infiltration into seminaries. Bella Dodd was a spy who revealed this strategy of corruption”

This  infiltration is confirmed in the Book of Truth:

Among the evangelists, there will rise many false prophets.

“My dearly beloved daughter, soon the changes I foretold, concerning My Church on earth, will be revealed.

The secular sects will shortly attempt to take everything, which My followers hold sacred, and introduce a new modern movement, within the Church …”

“…Pope Benedict XVI is being plotted against, within his own corridors, by an evil sect. This sect is known to exist among those sacred servants within the Vatican, yet they are powerless against this evil group, which has infiltrated the Catholic Church for centuries.

They are responsible for twisting the Truth of my Son’s Teachings. So little is known about them or their vile works.

They have driven the True Doctrine from the Catholic Church and, in its place a lukewarm, watered down version has been force-fed to Catholics over the last forty years.

So much confusion has been spread by this wicked, but, hidden sect, that my children have wandered away from the True Church. …

Pray that those sacred servants in the Vatican are strong enough to withstand this evil plot, designed to destroy the Catholic Church.

They plan to replace the Holy Vicar, Pope Benedict XVI, with a dictator of lies. He will create a new church in league with the antichrist and his group, in order to deceive the world.

Sadly, many of my children will, in their allegiance to the Catholic faith, follow blindly this new false doctrine, like lambs to the slaughter.

Wake up, children, to the Truth. This wicked plan has changed the fundamental authenticity of the Catholic Doctrine over the years….”

Some excerpts from the Alta Vendita.

A detailed list can be found in the link above. You will noticed that much of the plan has already been accomplished.

“Remove once and for all St. Michael, the protector of the Catholic Church, from all the prayers within the Mass and outside of the Mass. Remove the statues, saying that they distract from the Adoration of Christ. …

2. Remove the Penitential Exercises of Lent such as abstinence from meat on Fridays or even fasting; impede every act of self-sacrifice. In their place should be favored acts of joy, happiness and love of neighbor. …

3.Assign the Protestant ministers to reconsider the Holy Mass and to desecrate it. Sown doubts about the Real Presence in the Eucharist … Spread Protestants in seminaries and schools. Encourage ecumenism as the path towards unity. …

6.Prevent the faithful from taking Holy Communion kneeling. … Eliminate in the church kneeling and any genuflection. …

7.Eliminate the sacred music of the organ. Introduce the guitar, jew’s harps, drums, trampling and holy laughter in the churches. ….Perform liturgical dances around the altar in exciting clothes, theaters and concerts.

8.Remove the sacred character from the songs to the Mother of God and of St. Joseph. …Introduce Protestant songs. …

9… Preach love, tolerance and unity. Do not mention Jesus, prohibit any announcements of the Eucharist.

11. Discontinue the practice of celebrating the Holy Mass in the presence of the Blessed Sacrament in the Tabernacle. Do not admit any Tabernacle on the Altars that are used for the celebration of the Holy Mass. The board should have the appearance of a kitchen table.

This is just a taste. There are pages more. Click on the link above for a detailed list and other information. 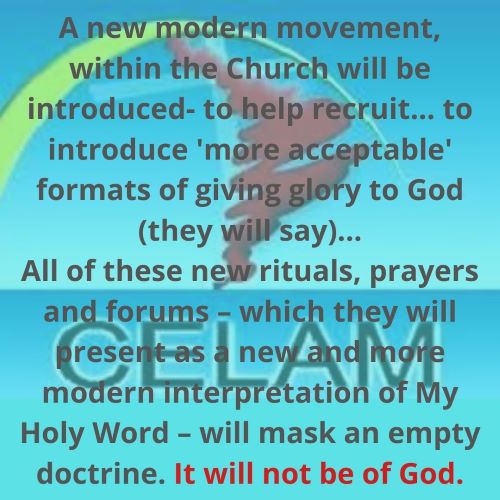 Among the evangelists, there will rise many false prophets.

My dearly beloved daughter, soon the changes I foretold, concerning My Church on earth, will be revealed.

The secular sects will shortly attempt to take everything, which My followers hold sacred, and introduce a new modern movement, within the Church. This modernism, they will say, will be to help recruit new sacred servants and to introduce more acceptable formats of giving glory to God, so that a new younger generation can be drawn back into the Churches of God. All of these new rituals, prayers and forums – which they will present as a new and more modern interpretation of My Holy Word – will mask an empty doctrine and it will not be of Me.

The new movement will be promoted as part of global evangelism, where the false doctrine, which will be carefully worded, so that it is seen to be theologically perfect, will entice millions. So many people will be drawn into this form of modernism and because of this, they will turn away from the True Faith. In what will be seen to be a radical revival of the Christian faith, it will denounce the Truth.

Many will be deceived and among the evangelists, there will rise many false prophets. These false prophets will promote false Christianity, which will replace the Holy Gospels, as laid down by Me and My Apostles. As the voices of apostasy are heard in every country, in different tongues and amongst different races, the True Word of God will be forgotten about. And, from the lips of these false prophets and self-proclaimed preachers of the faith, will pour many lies. My Scripture will be declared to be out of touch with the needs of mankind and desires of people living in the 21st Century. 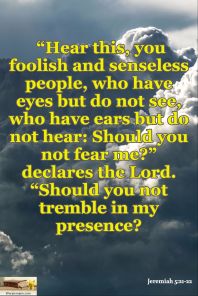 many people, their lack of faith in Me, has meant that they have had no interest in My Holy Word, up to now.  Soon, they will turn and enthusiastically embrace the greatest deceit the world will have ever witnessed. And while many will grasp, what they will believe to be a refreshing revival of Christianity, all that they will be fed, will be dictated by the enemies of God.

Let it be known, that man can never live on false doctrine and it will bring about total destruction in its wake, when souls will be devoured by blasphemy. That which does not come from Me, will lead to a global group, which will be applauded by people everywhere. Then, the time will have come for the new world religion to be announced and welcomed into My Church. This will then lead to the antichrist taking up his seat of honour in My Church, as foretold, when he will be invited in as an honoured guest by those who work in complete subjugation to Satan.

To those of you who will be tempted to indulge in this false doctrine, I warn you that man cannot live on bread alone but only on the Word, which comes from the Mouth of God.

-it will involve new rituals, new prayers and forums