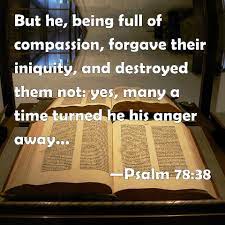 The Bible reading (Psalm 78) tells the story of God and his people.

The first few verses speak of how we teach our children about God and the things He has done for us, and how this is then handed down to the next generation. “that they too might put their confidence in God, And not forget God’s deeds, but keep his commandments. 8 They were not to be like their ancestors, a rebellious and defiant generation, A generation whose heart was not constant, and whose spirit was not faithful to God.”

The Psalm tells of how,during hardships, God would rescue His people; how then they would be grateful and turn to Him again; How He punished their enemies. It speaks of winning battles (‘Ephramite archers’ v.9); of all His deeds in Egypt to get them away; of His care for them in the desert. but “17 But they went on sinning against him,rebelling against the Most High in the desert.18 They tested God in their hearts,demanding the food they craved.”

The psalm continues (some extracts):

‘Then God led forth his people like sheep,  …  53 … the sea enveloped their enemies.c54And he brought them to his holy mountain,… 55He drove out the nations before them, …/”
“But they tested and rebelled against God Most High,his decrees they did not observe. 57They turned disloyal, faithless like their ancestors…”
“God heard and grew angry;he rejected Israel completely….
65 Then the Lord awoke as from sleep, like a warrior shouting from the effects of wine.
66 He put his foes to flight;everlasting shame he dealt them….”
The psalm is a story so pertinent to us today. It is good to reflect upon. It affirms all the “special graces” that God continually pours out upon us, even though we don’t deserve them.
Read the entire psalm here: https://bible.usccb.org/bible/psalms/78

Today’s theme of “Special Graces” is repeated in the readings (chosen randomly by prayer group members). Firstly – the Seal of the Living God; Secondly – the special graces of strength; God’s promises and warnings to humanity; and His promise to bring us to His New Kingdom on earth. 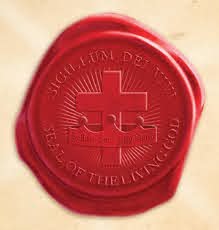 My dearest daughter, the world has awaited this moment for two thousand years. Some with fear in their hearts, others with anticipation and wonder, as to when this moment would come, and now it has.

This is the time I send My end time prophet, you, Maria, to finally present the Book of Truth, which reveals the contents of the Book of Revelation.

I Am the God for whom all of My children are crying out, in these terrible times. It is I, to whom, they, My distressed children, must call out for now.

I gather My family together, at this time, so that we can unite in the final battle to slay the dragon, who has tormented the Earth for so long.

You must listen to Me, children, and accept My Seal, for it will save not only your lives, but your souls. Recite the Prayer to receive My Seal every day.

Ensure that each member of your family and loved ones understand the significance of My Seal.

Your love for Me, your heavenly Father, will be your saving Grace and it will give you the strength that you need. My Seal of Protection is foretold, as the Second Seal is broken.

The rider of the red horse is the avenging dark angel, who will slay My children in the many wars to come. But he will pass over those of My children with the Seal on their foreheads.

Prepare now, for these wars are already happening and more are being planned in every corner of the Earth, and especially in the Middle East and in those lands upon which My precious Son, Jesus Christ, walked during His Time on Earth.

My dearly beloved daughter, I will protect you with the special Graces needed, to give you the strength to deal with the forces of evil, which are underway to stop this Holy Mission.

It is important to understand that human opinion is not important.All that matters, is My Most Holy Word. My Word is the Truth. I Am the Truth. Anyone who tells you these Messages are not in accordance with My Teachings is a liar.

They do not know Me. They may think they do, but they can only know Me, if they remain humble of heart. Those whose opinion contradicts My Word, are guilty of the sin of pride.

Pride blinds even My sacred servants to the Truth of My Holy Word.

My Promises to mankind, to come again in Glory to Judge the living and the dead, must come to pass. This, My Second Coming, cannot be prevented nor can it be stopped.

My warnings to humanity, given to them because I love every soul, are important.

I must prepare all of God’s children, adequately, for this Most Glorious Event.

All of these attempts will be useless.

Only I, Jesus Christ, have the Power to provide Eternal Salvation to the whole of humanity.

Only I have the Power to prepare the souls of all mankind for their inheritance in Paradise.

No one, not even Satan, the king of darkness or his minions, can stop this from happening.

Always remember this. I will protect all of those who abide by My Holy Word.

You may be frightened by global events, as the forces of darkness envelop your countries.

Events will distress you, but you must never fear, for I will bring you with Me into My New Kingdom on Earth.

All I ask is that you trust in Me.

Let Me guide you.

Allow Me to show you the way to purify your souls, through the Crusade of Prayers I give you. Then leave all to Me.

Remember, My Love for all of you is so strong, that no man can ever dilute this Pure Love and Compassion I hold for each of God’s children in My Sacred Heart.

Your beloved Jesus, Redeemer of Mankind

Note: The Seal of the Living God – more information from remnantdisciplesjtm.com/the-seal-of-the-living-god/ or see menu item on our home page

The Crusade Prayers can be downloaded from our home page as an app. onto your phone.  (remnantdisciplesjtm.com)

The prayers are available as text from: https://missionofsalvation.com/crusade-prayers/

The Seal of the Living God (info and image) is also available from the aforementioned site.

Last Thursday (26th May 2016), there were about 8 of our Crusade Prayer Group at Mass in the morning. After Mass and Adoration, we have our weekly Prayer meeting at a prayer group member’s home. It was the Feast of Corpus Christi (according to the Traditional Calendar). Two of the prayer group members (L. And E.) were kneeling next to each other with a space between them. Unknown to the rest of us, something happened during Mass. L told E. later, that she felt someone brush past her just at the Consecration. She felt it on her upper arm and a wisp of her hair also seemed to just fly up near her face.

Now these spiritual occurrences are not new to our prayer group. Over the last few years, we have had varied experiences (which you can read under ”Signs and Wonders”). About 2 hours later, the prayer group was assembled at my house for the meeting at my place. As it was Corpus Christi, we said the Luminous Mysteries of the Rosary. I was sitting behind, and to the side of my daughter. Her little boy would sometimes come in to whisper something in her ear, then walk back out to play. He can always be heard.

On this occasion, while praying the 5th Luminous Mystery –  the institution of the Eucharist , I felt someone brush past me, against my left upper arm. I was kneeling, (L. was also kneeling that morning at Mass). I had my eyes closed, but I didn’t open them, as I did not want to be distracted from my prayer.  I thought  that maybe it was my little grandson, but I thought that he was very quiet – I realized I didn’t hear any footsteps.

I didn’t say anything. I thought that whenever something happens, someone else always notices something. We always stay and chat, but no-one mentioned anything.It was on my mind, however, and 2 days later, I decided to ask E. whether she had noticed anything unusual at the Prayer Meeting. She told me to be specific. I told her what happened. She was surprised. She told me what had happened to L. at Mass on the Thursday morning at Mass. It was the same experience!

We were both motivated to tell the same person about our individual experience.

We were both kneeling at the time.

We were both focussed on the Eucharist.

We both felt the ‘brushing past’ on our upper arm – we were kneeling, (He) was walking past us.

It was a special Feastday. It seemed that he Lord wished to impress upon us the importance of, and the Real presence in, the Holy Eucharist. Perhaps we need to make more reparation against blasphemies and sacrileges against the Blessed Sacrament. Interestingly, the prayer  theme for the day was “Special Graces”. We indeed are very blessed.

Thank you Lord for being with us and guiding us.

Praise to You, Lord Jesus Christ, King of endless glory!!!

Like Loading...
I sent your email to (C) as she was not at the prayer meeting on Thursday.
And guess what? She was praying to St Therese!!!
I think Our Lady of the Rosary is still relevant because it was right at the end of the Rosary.
A long time ago there was this guy (with curly, woolly hair) who sent all these books to  bishops and priests.
He used to always talk about the miracles of Rosary prayer groups that would happen in the future.
I think we are truly blessed.
This is also the month of the Rosary.
And St Therese is one of Australia’s patron saints.
Mum
Sent: Saturday, 5 October 2013 4:04 PM
To: (Mum)
Subject: RE: Miracle for Our Crusade Prayer Group: to be shared
Hi   … , I haven’t even read all the other letters yet but I couldn’t
wait to reply when I read the part where Donna asked if anyone had
specifically asked  for St Therese’s intercession that day, and as she is
a favourite saint of mine I prayed a lot to her that day as it was her feast
day, I prayed at Mass then at home in the afternoon and I specifically
asked her to send a rose from the heavenly garden as a sign she was
indeed listening, now I am very emotional having read Donna’s letter,
I believe it is indeed a sign that we are not alone and have lots of heavenly
helpers, I have another story about St Therese, I’ll tell you on Thursday
GOD willing, now I’ll read the rest of the emails, thank you so much for
sharing see you all on Thursday, GOD Bless xx