In the  17th century, Jesus appeared many times to Margaret Mary Alacoque, who, from her earliest years, lived a penitential life exhibiting an extraordinary devotion to the Blessed Sacrament.

To her He opened His Heart and expressed His sadness over the lukewarmness of the vast majority of the practicing faithful and especially those who had vowed themselves by religion to have no other love but His. On His third apparition to the young novice, in 1675, He opened His robe and exposed His human Heart saying:

“Behold this Heart which has so loved men that it has spared nothing, even to exhausting and consuming itself, in order to testify its love. In return, I receive from the greater part only ingratitude, by their irreverence and sacrileges, and by the coldness and contempt they have for me in this sacrament of love…. I come into the heart I have given you in order that through your fervor you may atone for the offenses which I have received from lukewarm and slothful hearts that dishonor me in the Blessed Sacrament.”

Jesus complained to St Margaret Mary about the ingratitude, irreverence sacrileges, coldness and contempt to Him present in the Blessed Sacrament – the Eucharist. If that was true in 1675, what does He think of us today? The French Revolution was vicious. Given the way the Eucharist is treated today, our chastisements will be on a scale the world has never seen.

Jesus told St Margaret Mary that France should be consecrated to the Sacred heart – it was for a reason. When it was not done, 100 years later the French Revolution raged in France. The consecration was then done by the king before he was imprisoned. He consecrated himself and the nation to the Sacred Heart. It was 100 years too late – the revolution was in full swing. It did not save the king, but that consecration will save France.

This fact is depicted in a holy card which, until  today, I had not seen. It was a picture of the Sacred Heart with Notre Dame burning in the background. The picture fascinated me – I already knew about the King of France and the Consecration but this linked them together with Notre Dame. It would be great to find out when the holy card originated.  Anyhow many thanks to Michael Matt and The Remnant  for the great job he does. 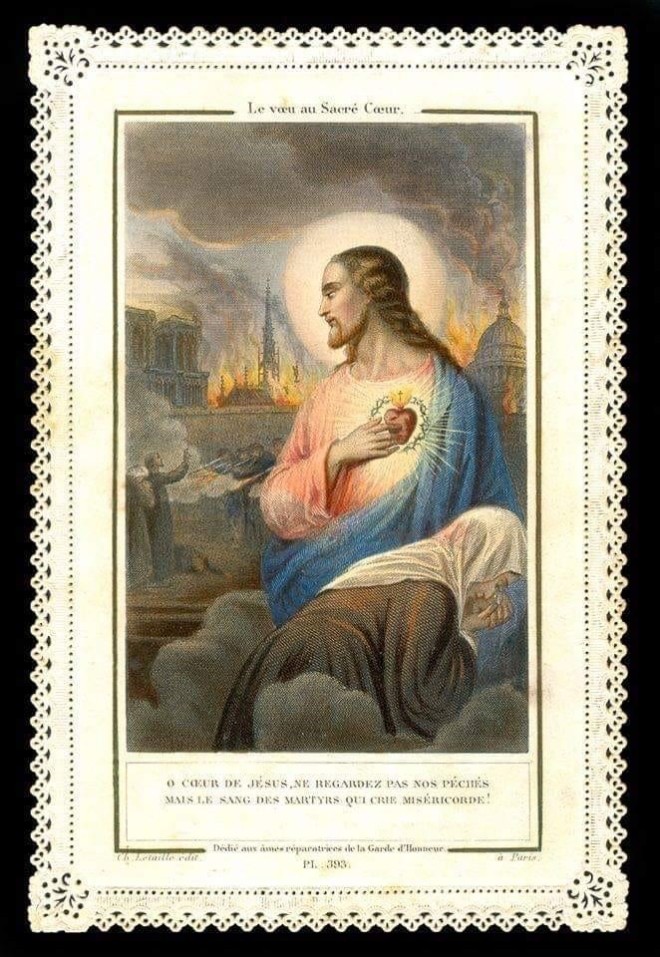 So also will our world today be saved by the Consecration to Our Lady’s Immaculate Heart, but it also will be late – 100 years too late.

Jesus referred to this procrastination to Sr Lucy in 1931: “Make it known to My ministers, that given they follow the example of the King of France, in delaying the execution of My command … that like him, they will follow him into misfortune, they will repent of it,  and they will do it, but it will be late. Russia will already have spread its errors in the world …”

We know that prophecies are for a reason. God warns his people. All His words are true. He warns us what will happen. We trust in God and we trust in His Mercy. He told us what to do and we (like the kings of France) didn’t do as He told us. We didn’t consecrate Russia to the Immaculate Heart.

Notre Dame is a sign to us, and this is evident to many in the world today.  It happened in Holy Week. The Church (the Mystical Body of Christ) will suffer as Christ did.

It was a drastic event, largely unexplained. It is a price that Catholics had to pay. Sometimes God takes drastic action to make us sit up and take notice. The people of France, knelt and prayed outside on the streets while Notre Dame was burning. No doubt this event is part of the chastisement. We know much still has to follow. It has all been foretold.

The destruction of churches has been foretold in the Book of Truth. All these prophecies will be fulfilled. But as in the days of Noah, God will save those who remain faithful to Christ’s teachings.

Prophecies from the Book of Truth:

“…The death of My Church will not be tolerated, as man, along with the false leaders he will slavishly follow, will destroy the Sacraments and recreate them, so that they will disappear. I will pull down your temples and your churches as you continue your desecration of My Son’s Body. You scourged Him, mocked Him and persecuted His followers – until you savagely murdered Him, when you crucified Him. Still, you have not learned. Your lack of humble servitude, to He Who gave you life, brought you Redemption and Who now attempts to prepare you for the Great Day, disgusts Me….” (God the Father: March 31, 2014 @ 2:00pm)

“...The beast is planning the destruction of humanity in two ways, at this point in time. In the first instance, he is destroying life through abortion, murder and war. In the second instance, he is attacking My Church on Earth so that all churches, which honour Me, Jesus Christ and My beloved Father, are destroyed....” (Jesus: June 6, 2013 @ 4:00pm)

“…These people will destroy My Churches and few will be allowed to offer the daily Sacrifices. Yet, there will be those among them, which will remain standing because of the Grace of God.…” (20 January 2013 @ 5:50pm)

“... “My child, many signs will be made known from the Heavens, upon the roofs of my Son’s Churches, when the final changes are made in the Liturgy of the Holy Mass. All those who keep their eyes open and their ears alert will witness the Anger of my Son in a way in which they cannot fail to notice.

My Son promised that He would make known His Anger when they, within His Church on Earth, crucify Him again by defiling His Body and Blood during the Holy Sacrifice of the Mass.” (God the Father: Sept 23rd, 2013)