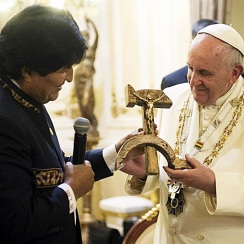 The English Denzinger-Bergoglio site (which was run by priests, and which (strangely??) has not been active for a few years, was invaluable and priceless in terms of comparing everything Francis claimed to what authentic Church Teaching says.

We have a few good bishops and just a few priests who publicly publish corrections of what Francis says and does, but they are not enough.

The following is an example of one article I had saved. It is very long, so I will post just a few bits every day. There are 17 parts in all. I will try to post one each day. They are an invaluable resource to have on hand for arguments against Francis’ problematic teachings and sayings.

(The text that is in bold  is in the original article. I have added colour to the headings only)

How many winds of doctrine have we known in recent decades, how many ideological currents, how many ways of thinking. The small boat of the thought of many Christians has often been tossed about by these waves – flung from one extreme to another: from Marxism to liberalism, even to libertinism; from collectivism to radical individualism; from atheism to a vague religious mysticism; from agnosticism to syncretism and so forth. Every day new sects spring up, and what St Paul says about human deception and the trickery that strives to entice people into error (cf. Eph 4: 14) comes true. Today, having a clear faith based on the Creed of the Church is often labeled as fundamentalism. Whereas relativism, that is, letting oneself be ‘tossed here and there, carried about by every wind of doctrine’, seems the only attitude that can cope with modern times. We are building a dictatorship of relativism that does not recognize anything as definitive and whose ultimate goal consists solely of one’s own ego and desires. (Cardinal Joseph Ratzinger. Homily for the Pro eligendo Pontifice, April 18, 2005)

Actually, the proclamation of and witness to the Gospel are the first service that Christians can render to every person and to the entire human race, called as they are to communicate to all God’s love, which was fully manifested in Jesus Christ, the one Redeemer of the world. (Benedict XVI. Address to the participants of the International Conference on the occasion of the 40th anniversary of the Conciliar decree Ad gentes, March 11, 2006)

…judges Francis’ idea on God judging us by loving us

Next let us reflect further on this verse: Christ, the Savior, gave to Israel repentance and forgiveness of sins (v. 31) in the Greek text the term is metanoia he gave repentance and pardon for sins. This to me is a very important observation: repentance is a grace. There is an exegetical trend that states that in Galilee Jesus would have proclaimed a grace without conditions, absolutely unconditional, therefore also without penitence, grace as such, without human preconditions. But this is a false interpretation of grace. Repentance is grace; it is a grace that we recognize our sin; it is a grace that we realize the need for renewal, for change, for the transformation of our being. Repentance, the capacity to be penitent, is a gift of grace. And I must say that we Christians, even in recent times, have often avoided the word penitence it seemed to us too difficult. (Benedict XVI. Homily for the Eucharistic Concelebration with the members of the Pontifical Biblical Commission, April 15, 2010)

The image of the Last Judgement is not primarily an image of terror, but an image of hope; for us it may even be the decisive image of hope. Is it not also a frightening image? I would say: it is an image that evokes responsibility, an image, therefore, of that fear of which Saint Hilary spoke when he said that all our fear has its place in love. God is justice and creates justice. This is our consolation and our hope. And in his justice there is also grace. This we know by turning our gaze to the crucified and risen Christ. Both these things–justice and grace–must be seen in their correct inner relationship. Grace does not cancel out justice. It does not make wrong into right. It is not a sponge which wipes everything away, so that whatever someone has done on earth ends up being of equal value. (Benedict XVI. Encyclical Spe salvi, no. 44, November 30, 2007)

…judges Francis’ idea on Jesus asking forgiveness from his parents

In the episode of the 12-year-old Jesus, the first words of Jesus are also recorded: ‘How is it that you sought me? Did you not know that I must be in my Father’s house?’ (Lk 2:49). After three days spent looking for him his parents found him in the temple, sitting among the teachers, listening to them and asking them questions (Lk 2:46). His answer to the question of why he had done this to his father and mother was that he had only done what the Son should do, that is, to be with his Father. Thus he showed who is the true Father, what is the true home, and that he had done nothing unusual or disobedient. He had stayed where the Son ought to be, that is, with the Father, and he stressed who his Father was. (Benedict XVI. General audience, December 28, 2011)

Paul experienced in an extraordinary way the power of God’s grace […] All of his preaching and even more his entire missionary existence was sustained by an inner urge that can be traced back to the fundamental experience of ‘grace’. ‘By the grace of God I am what I am’, he writes to the Corinthians, ‘…I worked harder than any of them [the Apostles], though it was not I, but the grace of God which is with me’ (1Cor 15:10). It is a question of an awareness that surfaces in all his writings and that served as an inner ‘lever’ with which God could propel him onwards, toward ever further boundaries, not only geographical but also spiritual. (Benedict XVI. Homily on Ash Wednesday, February 25, 2009)

Faith demands to be passed on: it was not given to us merely for ourselves, for the personal salvation of our own souls, but for others, for this world and for our time. (Benedict XVI. Homily for the Episcopal ordination of five new Bishops, September 12, 2009)

‘How do we acquire a living faith, a truly Catholic faith, a faith that is practical, lively and effective?’ Faith, ultimately, is a gift. Consequently, the first condition is to let ourselves be given something, not to be self-sufficient or do everything by ourselves – because we cannot -, but to open ourselves in the awareness that the Lord truly gives. It seems to me that this gesture of openness is also the first gesture of prayer: being open to the Lord’s presence and to his gift. This is also the first step in receiving something that we do not have, that we cannot have with the intention of acquiring it all on our own. We must make this gesture of openness, of prayer – give me faith, Lord! – with our whole being. We must enter into this willingness to accept the gift and let ourselves, our thoughts, our affections and our will, be completely immersed in this gift. Here, I think it is very important to stress one essential point: no one believes purely on his own. . The Creed is always a shared act, it means letting ourselves be incorporated into a communion of progress, life, words and thought. We do not ‘have’ faith, in the sense that it is primarily God who gives it to us. Nor do we ‘have’ it either, in the sense that it must not be invented by us. We must let ourselves fall, so to speak, into the communion of faith, of the Church. Believing is in itself a Catholic act. It is participation in this great certainty, which is present in the Church as a living subject. (Benedict XVI. Meeting with the members of the Roman clergy, March 2. 2006)

The other thing concerns the fact that we ourselves cannot invent faith, composing it with ‘sustainable’ pieces, but we believe together with the Church. (Benedict XVI. Address to the Bishops of Switzerland, November 7, 2006)

Faith is not a product of our thought or our reflection; it is something new that we cannot invent but only receive as a gift, as a new thing produced by God. (Benedict XVI. General audience, December 10, 2008)

This is why Christian antiquity used the same words, Corpus Christi, to designate Christ’s body born of the Virgin Mary, his eucharistic body and his ecclesial body. This clear datum of the tradition helps us to appreciate the inseparability of Christ and the Church. The Lord Jesus, by offering himself in sacrifice for us, in his gift effectively pointed to the mystery of the Church. It is significant that the Second Eucharistic Prayer, invoking the Paraclete, formulates its prayer for the unity of the Church as follows: ‘may all of us who share in the body and blood of Christ be brought together in unity by the Holy Spirit.’ These words help us to see clearly how the res of the sacrament of the Eucharist is the unity of the faithful within ecclesial communion. The Eucharist is thus found at the root of the Church as a mystery of communion. (Benedict XVI. Apostolic exhortation Sacramentum Caritatis, no. 15, February 22, 2007)

‘How do we acquire a living faith, a truly Catholic faith, a faith that is practical, lively and effective?’ Faith, ultimately, is a gift. […] We do not ‘have’ faith, in the sense that it is primarily God who gives it to us. Nor do we ‘have’ it either, in the sense that it must not be invented by us. (Benedict XVI. Meeting with the members of the Roman Clergy, March 2, 2006)