We started off by going to a Mass at 7am in a small chapel in an orphanage which was built by Fr. Slavko who died in 2000.

Our Austrian friend from World Youth Day was there and another German friend. The hymn at the end of Mass was in 2 languages. I didn’t understand the first but I recognized the word “Gospa” which refers to Our Lady at Medjugorje. The next was in German which I understood. The words were simple and I was concentrating on what I was hearing. I heard “Mary, my Mother, you are my Mother too.”

Well, the tears just started to roll down my face. It makes me teary just remembering it. I wasn’t expecting this. I often pray to Our Lady as “Mother of all mothers” when I have a motherly problem and ask for her intercession. 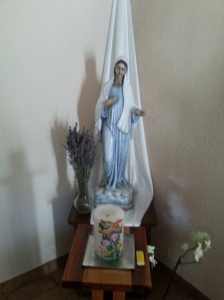 It was a special grace from Our Lady to start my time at Medjugorje.

There are always large numbers of priests who want to say Mass. Sometimes there are 20 or more concelebrating. There is the main church which has a 10am English Mass each day and lots of other Masses during the day. There is also an Adoration Chapel which has adoration from 2pm to 6pm each day. The whole complex is run by Franciscans.

Two of our group went to Adoration in the afternoon because they were not able to do the climb on the Apparition Hill. Towards late evening they stayed for Mass even though they had been in the evening. One thing they noticed is that 90% of people receive Holy Communion kneeling, and on the tongue!

We arrived home from our 3 hour eventful climb (more later), came home for a quick clean-up and headed off to the church for the evening’s activities.

Being Friday, after the Rosary, it was Adoration of the Cross. There is an altar which is exposed to the

outside as the church inside is not big enough. There were about 2 thousand people there today. There are also about 50 confessionals built on the outside, with bench seats for people to line up. As well as these, there are priests simply sitting on chairs hearing confessions.

BUT the most amazing thing wasn’t any of the above. We joined the people on the outside facing the platform with a huge Cross and a statue of Our Lady near the altar.  There was beautiful music that helped you meditate and various meditations were read – each one in about 4 or 5 different languages. They were simple ones like “Remember me when you come into your kingdom” and a short application of each to our personal lives. There were short breaks in between each one. It went for about an hour.

The amazing thing was that not one person whispered, or spoke or moved around. Not even children could be heard. Not even in a church does this happen! It was really unbelievable.  And afterwards they left just as silently and there were thousands of people.

The presence of Our Lady is evident:

There were people from all different countries – Italian, Mexican, Irish, the locals, German and of course, us Aussies. These were ones we spoke to. There was a holy and reverent atmosphere that was unmistakable. This place has blessings flowing from heaven– from Our Lady “the Queen of Peace”. (She first appeared in 1981 – 10 years before the Bosnian war. Her message was “Peace, peace, peace”)