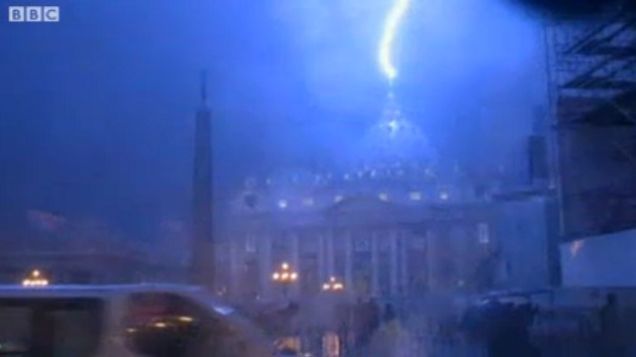 This article makes obvious what should be obvious to all the faithful. God will never let us down. We need to be strong in our faith and use the God-given powers of discernment. There are so many people in pain because they don’t try to understand. The pain is much more bearable when we know that Jesus is with us and with the Truth. A church that twists and changes the Truth that He taught us, is not his Church. We have eyes to see and ears to listen – be attentive! God will show you if you ask !

And many are asking if the Church of Rome has lost the faith.

Our Lady at La Salette told us through Melanie that Rome would lose the faith. And many Catholics believe that this refers to the Church.

But as a Catholic, and a Roman Catholic, in both senses, that is of the Latin Rite and as a resident of Rome, Italy, I want to remind Catholics everywhere, that our Lady said “Rome”, not “the Church of Rome”.

The Catholic Church can never fail and she shall stand…

Paul VI’s quote mentioned in your article was on 29 June 1972, the feast of St Peter and Paul, i.e. the feast day of the papacy.

“From some fissure the smoke of Satan has entered the temple of God.”

“The Church finds herself in a period of anxiety, of self-criticism, one could say of self-destruction. It is like an internal upheaval, serious and complex–as if the Church were flagellating herself.”

You do not have to be a rocket scientist to figure out that the aforementioned “fissure” was opened up by John 23rd  when he announced the second Vatican Council,  3 months after his questionable election in 1958:

“Throw open the windows of the church and let the fresh air of the spirit blow through.” ~

As some, or now many, of us can very, very, very, clearly see, that, after the 50 years of grey that followed the 1933 years of black and white, the fresh air that John 23rd let into the Vatican has turned out to be, as Paul VI so correctly discerned,  the masonic smoke of satan, fulfilling the first part of the La Salette prophecy of 170 years ago where Mary said,

and we are living through, right now, the end game of this window opening infiltration of ecclesial masonry, this final faux papacy of the false prophet of the Apocalyse, the 2nd Beast of Revelation 13, who has prepared (what’s left of) the Catholic Church for the entry of the antichrist, the first Beast of Revelation 13, after the Abomination of Desolation when Jesus will be removed from his own house, so that very, very, very soon, the second part of the La Sallette prophecy may be fulfilled,

“… and become the seat of the antichrist”.

(TtCrusader also sent me the masonic plan as described in last post. Seems to be the same source: “From the column «Storia» of the magazine:«Teologica» n. 14 – March/April 1998 – pages 22-25; Edition Segno – Udine – Italia”) 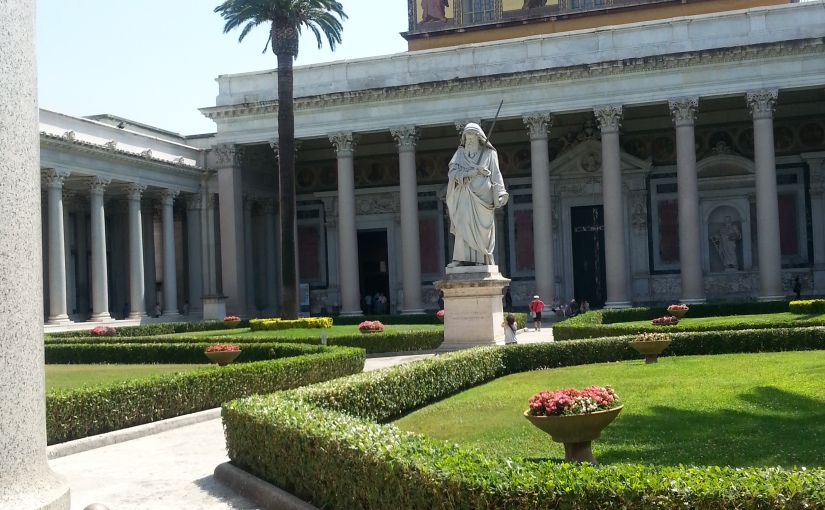 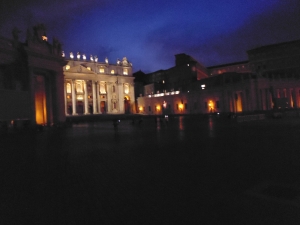 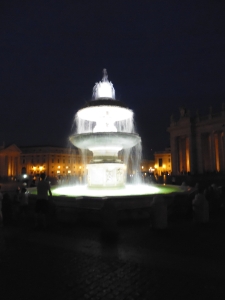 Today was a hectic day. Yesterday we travelled from San Giovanni Rotundo via car and then 3 hours by train. Needless to say it was a hot day (about 38°C). The train was an hour late arriving so we waited in the heat. More for us to offer up. This time, however, there was food that we could buy on the station platform.

Our poor driver was waiting at Rome for us for an hour, all dressed up in a suit. He must have been so hot. However we had a great time talking with him on the way to the hotel. It was so pleasant to be able to converse and he gave us a wonderful introduction to Rome- like a mini tour – explaining all the landmarks as we went. So you see, Jesus is good to us – with every downside there is an upside.

The next morning we were picked up for our tour by our official driver and our guide. His name was Vincenzo.

First stop was the Colosseum. This really put us in touch with our Christian roots, with the guide explaining the pagan society and the entertainment with gladiators, lions and Christians. He told us how St. Ignatius of Loyola died this way.

He told us how each Good Friday, the popes throughout history would always say 4 Stations of the Cross there. Also, how there is a little altar in one of the arches in which a priest says Mass every day, for all those martyred. He also mentioned Pope Innocent VIII in the 15th Century who commemorated the passion of Christians in the Colosseum and Pope Clement X who dedicated the Colosseum to God. We said a little prayer for all those who had died. 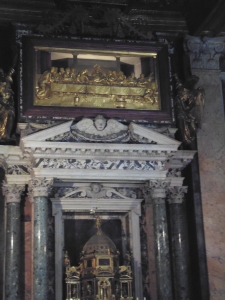 h is actually the church (seat) of the Bishop of Rome. There is a depiction of the Last Supper and behind this picture are relics from the Last Supper table.The main altar is built within an apse which holds (at the top) the heads of Saints Peter and Paul. We prayed through these saints for the Church and its bishops, priests and cardinals and also the Church remnant. We presented our petitions so that they would pray for us. Reverently, we got our handkerchiefs out and touched the base of the apse which housed these precious relics. 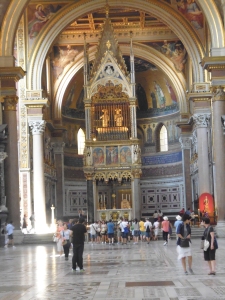 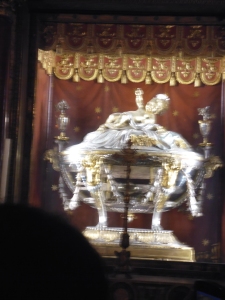 s relics of the manger in which Jesus was laid.  It is in a silver frame and surrounded by glass. You can see the wooden slats through the glass.

There was a chapel dedicated to Our Lady of the Snows. The chapel has a painting which shows the pope (Liberius) drawing the line in the snow to outline where the chapel should be built. Our guide told us how the pope had dreamed of snow falling and that he was to build a basilica there. Our Lady gave him the sign. Snow fell on August 5th, 352 AD – in the middle of Summer!

Around the walls were 3 rows of paintings which depicted the prophets, and people of Old Testament such as Moses, Jacob and Joshua and God’s promise of a Saviour.

St. Paul (outside the Walls)

Here we saw the actual chains that bound St Paul in prison, as well as his bones which are in

the sarcophagus. Inside we saw a huge Paschal Candle stand from the 12th century.

The guide tells us that when Paul was beheaded, his head bounced 3 times and that where it bounced, 3 springs of water sprung up. (I hadn’t heard this before).

This was where our English speaking guide left us. We were very grateful. He taught us and showed us so much about our Faith. We promised to pray for him.

The Catacombs: 8th July
This afternoon we did a tour of St. Sebastien catacombs. There was a church where we could pray and light candles before Our Lady for our Prayer Group intentions.

We had to wait for an English tour guide. It was very touching to see these places where the early Christians lived and gathered and prayed and were buried. It was moving to touch the walls that these early persecuted Christians had touched and to say a prayer for them.

There were many young children and babies who died. We could see the names and Christian symbols on their graves. St Sebastian was buried there and his place was marked but his body was later moved to the Church (at the catacombs site). His relics are part of the altar.

This morning 4 of us went on a pre-booked tour of the Vatican Museum/ Sistine chapel. We were split up among a number of guides – each with a smaller group of about 20.

At first he seemed ok. He was very animated and enthusiastic in his descriptions of objects and history of various things. He seemed to waste a lot of time talking about trivial things. 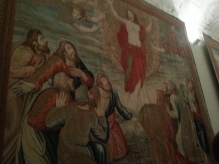 The huge tapestries were amazing. He proceeded to take us to see various objects in the Museum. A lot were pagan gods such as Apollo, Atlas etc. He pointed out how some of these provided the basis for certain paintings and carvings of holy things. I began to be not impressed.

We came to a reconstruction in miniature of the pantheon with all the various gods in each archway. He said in his usual jovial voice (and I don’t know if it’s true) that there was Mass held there every Sunday at a certain time. I called out “What? Here? In the Pantheon?” He said “yes”. There was no sign of any kind of altar – only a huge sort of shallow bowl.

By this time I was really mad and sad and couldn’t wait to get out of there. Finally, at the end of the tour – after a whole hour- we came to the Sistine Chapel- which is why we came.  He (the tour guide) didn’t enter the chapel. The chapel was big and the paintings beautiful. We stayed a while to ponder. 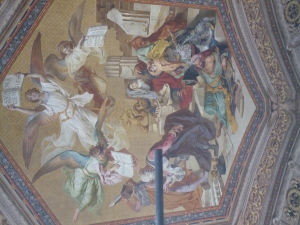 When we returned to our hotel, we spoke to others in the group who had been 20 years previously. They said that the Vatican Museum had lots of beautiful, holy things but all we saw were the tapestries and a view of the Vatican gardens and Pope Benedict’s residence.
Our Hotel in Rome:

Once again, we felt so blessed. Our hotel rooms each had a holy picture on top of our beds and a Bible (but in Italian). And there was a chapel with an altar and the Blessed Sacrament present, where we could pray as a group, and attend Mass when there was a Mass being offered.